The so-called "diplomatic boycott" of the Beijing 2022 Winter Olympics by the United States is a self-directed political farce, said a spokesperson of the Chinese UN mission on Monday.

"Beijing Winter Olympic and Paralympic Games are a gathering for all winter sports athletes and fans around the world. It is they that should be in the spotlight. The success of the games does not rely on the attendance of a handful of countries' government officials," said the unnamed spokesperson in a statement.

Based on the groundless allegations once again targeting China's Xinjiang, the White House has reportedly confirmed that it will stage a "diplomatic boycott" of the Beijing Winter Olympics.

Washington's latest attempt to politicize the forthcoming global sports event runs counter to the Olympic spirit that intends to unite rather than divide. This blatant political provocation will also risk damaging Sino-U.S. relations, one of the world's most important bilateral relationships that stands at a crucial crossroads.

A foreign ministry spokesperson on Monday urged the United States to stop hyping up the so-called "diplomatic boycott" of the Beijing Winter Olympics, saying that China will take countermeasures if the U.S. insists to do so.

Spokesperson Zhao Lijian made the remarks at a daily press briefing when asked about the Biden administration's plan of announcing a so-called "diplomatic boycott" this week.

Washington has been claiming that the so-called "democracy summit" aims to promote the common values of humankind. Really? Just take a look into how the gathering is organized and what it truly plans to discuss. Any sober mind can easily see through the ruse: The event has nothing to do with improving democracy, but is mainly about maintaining America's global supremacy.

Diplomatic boycott will not halt global aspiration for the Beijing 2022 Olympic Winter Games, which belongs to the athletes instead of politicians.

As the Beijing Winter Olympic Truce Resolution was adopted by the 76th session of the United Nations General Assembly on Thursday, the Games was recognized as an opportunity to demonstrate the value of human solidarity, resilience and international cooperation.

Sport was recognized as a tool to bring the world together to overcome the epidemic, achieve peace, and promote dialogue and reconciliation.

With Winter Olympic and Paralympic test events for Beijing 2022 in full swing, calls for a diplomatic boycott and threats of not sending athletes to Beijing 2022 by some western politicians do not change the fact that the Games will be a gathering of the world's winter sports athletes.

President of the Russian Olympic Committee (ROC) Stanislav Pozdnyakov echoed that thought. "I would like to note that the Olympic movement is not a part of the global political system," he said. "We believe that sports must be distanced as much as possible from complicated political issues."

Chinese Foreign Ministry spokesman Wang Wenbin said that a successful and splendid Olympic Games requires the concerted efforts of the big Winter Olympic family, and is not dependent on whether a handful of countries' government officials will attend or not. 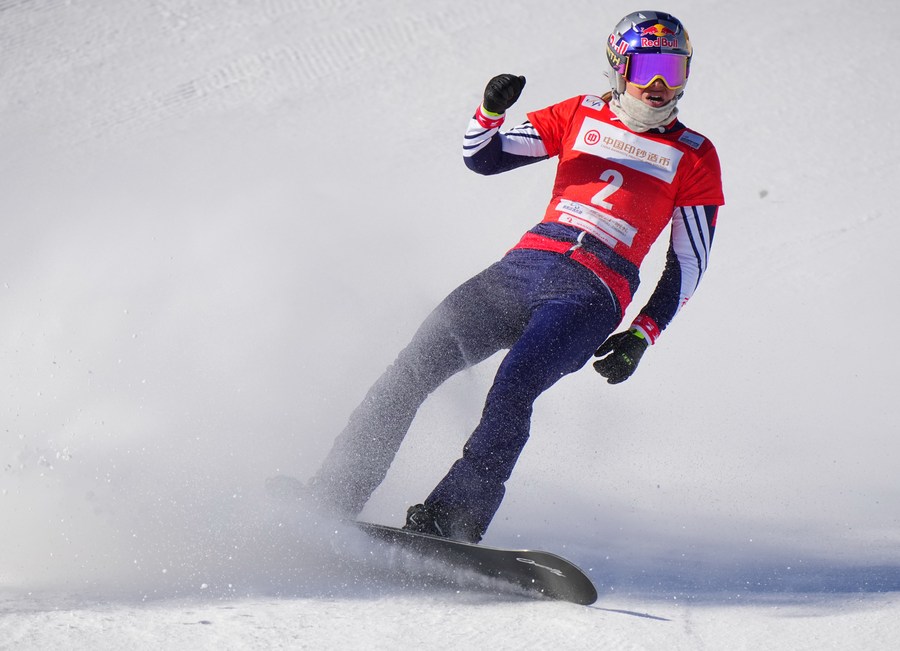 It is the voice of the athletes that should be heard, respected and accepted when talking about the Olympics.

In the meantime, athletes are sending out the same message with their actions and words: nothing can stop their aspirations for the Olympic Games.

Two-time Olympic gold medalist Alpine skier Mikaela Shiffrin said athletes should not have to sacrifice a pivotal moment in their careers for political reasons.

"The Olympics is big, and it's something that you shoot for, and you don't want to miss it," the 26-year-old American said, explaining that the Beijing Winter Olympics "can actually bring hope to the world at a very difficult time." After the test runs for bobsleigh and skeleton between October 5 and 27, German skeleton athlete and 2018 Olympic silver medalist Jaqueline Lolling said the track invokes "pure motivation and inspires you to compete at the highest level."

German bobsleigh head coach Rene Spies called the venue "architecturally outstanding" as it is "smoothly embedded in the landscape."

"Everything was perfectly organized," Spies added, calling the trip to China ahead of several European Cup events a success.

Bree Walker of Australia, who is set to make her Olympic debut in the newly-introduced women's monobob, or individual bobsledding, has also tested at the Yanqing National Sliding Center and commended the venue as "world class."

"If the facilities are anything to go off, I think these are going to be a spectacular Olympics," Walker added. "It's going to be anyone's game here in February."

Madagascar-born Alpine ski racer Mialitiana Clerc, the first Malagasy woman to compete at the Winter Olympics in PyeongChang, designed her Olympic competition suit for Beijing 2022 with the motivation to "inspire all Africans and inspire my followers." The modern Olympic Games has always been one of the driving forces for peace and mutual understanding amid crises. Therefore, as the world still faces severe challenges brought about by the COVID-19 pandemic, people should cherish the opportunity to gather around and practise the Olympic motto of "Together."

Russian Foreign Ministry spokesperson Maria Zakharova made clear that Russia opposes the politicization of Beijing 2022. "We wish China the same success, not to succumb to provocative statements, but to organize everything in the name of sports and peace, on behalf of athletes and sports fans."

Enkhbat Badar-Uugan, secretary-general of the Mongolian National Olympic Committee, believes "it is wrong to boycott the Olympics in any way."

In the face of a diplomatic boycott, preparations for Beijing 2022 have not been affected, but have proceeded smoothly into their final stages. From October 5 to December 31, 10 international events, three international training weeks and two domestic test events are being held at eight competition venues in the three competition zones of Beijing, Yanqing and Zhangjiakou, while the torch relay will be held in the three zones from February 2 to 4, 2022.

In 63 days, the Olympic flame will be lit again at the opening ceremony of Beijing 2022, bringing together hope, courage, peace and solidarity from around the world under the Olympic flag. China will once again realize its solemn commitment to the world.

Washington's attempts to misinterpret, obfuscate and encroach on the one-China principle have flagrantly violated international law and the basic norms governing international relations, and damaged its credibilities. They clearly demonstrate that the United States is the biggest threat to peace and stability in the region.

BEIJING, Dec. 5 (Xinhua) -- In his speech at the Reagan National Defense Forum on Saturday, U.S. Secretary of Defense Lloyd Austin gave inconsistent remarks on Taiwan, saying the United States "remains steadfast to the one-China policy" while supporting "Taiwan's ability to defend itself."

Lithuania has turned to the EU for help after local media outlets hyped that the Chinese customs had blocked all imports from the Baltic nation amid an escalating diplomatic dispute over the Taiwan question. But if the EU respects the one-China principle, then it has the responsibility to restrain Lithuania from recklessly elevating its own political issue to the bloc's economic and trade sphere.

Lithuanian Foreign Minister Gabrielius Landsbergis said on Friday that the country would seek assistance from the European Commission next week to solve the "unannounced sanctions," Bloomberg reported.

The publication ceremony of the book entitled Hong Kong's Participation in National Reform and Opening Up and the signing ceremony of the Memorandum of Understanding on a history book on the Guangdong-Hong Kong-Macao Greater Bay Area were held on Monday in Hong Kong. Xia Baolong, director of the Hong Kong and Macao Affairs Office of China's State Council and vice chairman of the National Committee of the Chinese People's Political Consultative Conference, made a speech, via video link, to give an in-depth explanation of the four major advantages of Hong Kong's new electoral system: broad representation, political tolerance, balanced participation and fair competition. These evaluations are based on the objective reality of the active participation in the 7th Legislative Council election which resonated in all walks of life in Hong Kong.

The U.S. plans to hold a so-called “democracy summit” online from Dec. 9 to 10, putting on yet another drama on the international stage.

A crescendo of criticism has grown around the world ever since the country announced that it would convene the summit.

The Sino-US Dialogue on Cooperation in Climate Change was held on December 2nd on the sidelines of the 2021 Understanding China Conference to address the climate crisis and deepen multilateral cooperation. Participants from home and abroad held in-depth discussions on global climate governance and Sino-US cooperation after COP26.