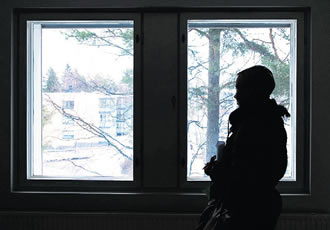 Enforced sales took place last year for almost 1,700 homes. Defaults have become as common as in the 1990s.

The space of a three-room apartment in Espoo has been emptied and floors cleaned. The ceiling fan is still. From the balcony a bifurcate pine is visible.

These three rooms and the kitchen, altogether 80.5 square metres were auctioned online last week for 133,014 euro. This is an everyday reality for the repossessor, but for the owner it was a personal tragedy.

Increasingly many homes are sold by the bailiff. Last year 1,657 apartments or properties were sold by judicial means, which is a decimal more than in the previous year.

"Something surprising takes place in one's life that could not be anticipated. A large mortgage, and then a spouse or both are become unemployed or break up," describes Juhani Tou-
kola, Director of the National Administrative Office for Enforcement.

The statistics on enforced sales by the enforcement office are tolerable, though, when compared to the depression of the 1990s. Back then, the office completed far more sales transactions of debtors, and the situation was direr in many ways. Apartments could not be sold for even cheaper prices.

"I sold apartments myself then, and it was hard work. The prices of apartments and properties were in freefall, and it was very difficult to determine a reasonable price. Now the markets are relatively stable, and it is possible to place a value on any sales target," Toukola says.

He reminds that the increase in enforced sales is not a result of the unstable economic situation alone. Statistics have been improved by the transfer of sales from banks to the officials of recovery proceedings and the intensification of the work of the National Administrative Office for Enforcement.

"I would say that the economic situation has somewhat affected enforced sales through the Stetson method."

The debtor's situation has improved from the 1990s in the sense that the interest level is now historically low. In the case of unemployment, for example, an agreement can more likely be made with the bank on temporarily paying interest only.

Debtors are also able to sell their apartments on their own, or it can be delegated to a real estate agency. Throwaway prices do not need to be accepted.

"Selling an apartment is very flexible in terms of schedules and how it is sold. Rarely does a debtor or creditor complain about final prices, either," says Distraint Officer Jukka Kajava.

The economic situation is also disturbingly visible in people's defaults that have reached the same level as in the depression years of the 1990s. For example, last year Asiakastieto registered an all-time high of 1.8 new defaults.

"When things turn bad the situation really falls apart. Personal economies have been strained and dealt with increasing consumer credit. Eventually none of it can be paid for," Heikki Koivula, Deputy CEO and Head of Business Information at Asiakastieto describes.

According to Koivula, addressing the situation is the only way to solve it.

"Bills need to be opened and flexible payback should be agreed upon with creditors. It is in everyone's interest. Personl expenditure should be monitored, and if necessary national debt advisors may be contacted," Koivula instructs.

He considers it very worrisome that creditors are not able to check debtors' loans from other creditors. "This kind of system should definitely be used in Finland too. It would clearly decrease the indebtedness of people."