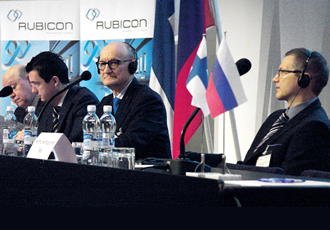 Rubicon Forum 2013: building the rails for Russian business people on their way to Finland.

A few obstacles down the road

The first morning session was dedicated to discussing the ups and downs of establishing a Russian-funded company in Finland. According to the experiences shared by Russian entrepreneurs who have already succeeded in finding their way into their neighbour country, the landing process can present certain complications due to a long market entry and project pay-off period; an increasingly competitive atmosphere; and high production and contribution costs.

According to Olga Torri, a Russian entrepreneur who has been running her own company in Finland for more than a decade, one of the reasons why it is so difficult for Russian business people to find how to proceed in Finland is the absolutely different legal framework. “Sometimes it’s very scary,” observes Torri, who was one of the attendees at the Rubicon Forum. ”Also, we have a border and all kind of custom-related difficulties. Thus, we need to establish some kind of railways in order to roll smoothly: problems can only arise when there is not enough information and the person doesn’t know what to do.”

”In certain parts of Russia we have the same cuisine, the same climate and sauna!” Torri adds, raising her voice over the bell tone that announces it’s time to take a seat at the conference room. ”There is not such a huge cultural barrier to overcome. That’s why I believe Finland is the best country for Russians to start a business abroad. It would be very difficult to do business with Japanese people: you have to train yourself on how to express your feelings, and understand their body language. What is absolutely all right for us could be insulting for them.”

There are around 240,000 Russian-speaking citizens in Finland.

“What Finland can offer to Russian companies is access to markets [referring to the Nordic countries and the EU], access to skilled people and a very stable operational environment. Apart from this, and also encompassing the list of advantages, we find other factors such as an optimal innovation climate and very strong public support for R&D projects,” said Tuomo Airaksinen, Executive Vice President at the government agency Invest in Finland.

“One of the major things to be considered is that now there are a significant number of Russian companies already operating in Finland, so they can have peer to peer discussions. How the first Russian companies entered the Finnish market, that’s the best lesson to be learnt,” Airaksinen states.

”Four years ago we started to think about how we could make the Russian business community more visible in Finland and, also, how the Kotka-Hamina region could gain more benefits out of Russian investments,” says Hannu Karavirta, Chief Executive at Cursor, organiser of Rubicon Forum.

“We have to keep in mind that new actors will bring new activities and jobs opportunities along with them,” Karavirta adds, before explaining that Cursor has been working with Russian companies for more than 10 years already. With such a long history in the field, connecting the Rubicon approach to their extended network was achieved in a natural way. “Our first mission is to clarify the main needs of the company who reaches out to us.”

“Russians are impatient,” Karavirta explains with a smile, when asked about the main differences in the way of doing business on each side of the border. ”Finns, on the other hand, like to plan more carefully and wait until everything is perfectly ready to operate. But, once Russians have made up their minds, they want to see things moving fast!”

Celebrating its second edition, this two-day-event was organised by Cursor, a development company operating in the Kotka-Hamina region (Southeastern Finland), with the support of Helsinki Business Hub, the investment promotion agency for the Greater Helsinki area and leverage from the European Union (EU).