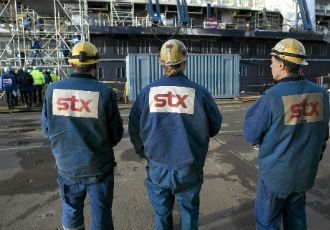 THE DEPUTY CEO of STX Finland, Jari Anttila, has confirmed to Helsingin Sanomat that the shipbuilding company has secured the funds it needs to deliver its current backlog of orders. The agreement, struck on Friday, thus allows STX Finland to complete construction on, for example, the two cruise ships ordered by the German cruise line TUI Cruises.

The cruise ships are being built at STX Finland's shipyard in Turku.

On the other hand, Anttila dismissed the recent rumours about the German cruise line planning to order another cruise ship from STX Finland.

Earlier this month, Jan Vapaavuori (NCP), the Minister of Economic Affairs, visited South Korea to discuss the state of the shipbuilding industry with directors of STX Finland's parent company, STX Offshore and Shipbuilding. The exact content of the talks remains unknown, with Vapaavuori's staff only confirming that the visit took place.

The woes of the industry also saw Vapaavuori visit the country in late October, when he met with for example Lyu Jung-hyung, the recently appointed CEO of STX, and Yoon Sang-jick, the country's Minister of Trade, Industry and Energy.

The frequent visits to South Korea are an indication of the Finnish Government's desire to maintain a good rapport with the shipping conglomerate.

In mid-September, STX Finland communicated its decision to shut down its shipyard in Rauma in order to concentrate its operations to Turku. The shipbuilding company also remains a shareholder in the Arctech Helsinki Shipyard but has agreed to sell its 50 per cent stake to the Russian state-owned United Shipbuilding Corporation (OSK), pending the approval of competition authorities.

The financial woes of STX Finland re-surfaced two weeks ago, when the shipbuilding company's talks with Scandlines, a German-Danish ferry operator, fell through after it failed to attract investors to the project. In addition, banks recently declined to issue guarantees for the construction of an icebreaker ordered by the Finnish Transport Agency.