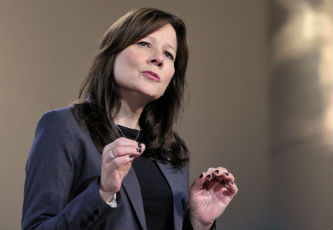 The “car gal” from Detroit has worked at GM for 33 years.

THE GLOBAL glass ceiling was rattled this week, when the American automobile giant General Motors (GM) appointed Mary Barra as the first female CEO of a global auto-maker. The parents of Barra, who turns 52 on Christmas Eve and whose maiden name is Makela, are of Finnish background, according to several newspapers.

Barra will thus become the second woman of Finnish background to ascend to the upper echelons of the global world of business in recent years. Last year, Marissa Mayer, whose mother is of Finnish descent, was appointed as the CEO of Yahoo!.

Barra will succeed the 65-year-old Dan Akerson as the auto-maker’s chief executive at the beginning of next year, after rising through a series of senior staff positions in her 33 years at GM. In fact, already her father, Ray Makela, worked at the traditional auto-maker’s Pontiac factory for nearly 40 years. The Makelas lived in a suburb of the Motor City, Detroit.

Barra joined GM in 1980 as a co-op student at the Kettering University and later graduated as an engineer. In addition, she holds an MBA degree from the University of Stanford.

Barra is currently the vice president of global product development at GM and is also responsible for the company's purchasing and supply chain. Previously, she has held the position of vice president of human resources, for example.

According to analysts, Barra's strengths include her comprehensive knowledge of GM's products and the production chain. In a press conference, retiring CEO Akerson described Barra as “a car gal” – a woman who knows her cars. Akerson himself had no automotive experience when he took over at the helm of the company in 2010.

As the vice president of product development, Barra oversaw the introduction of several well-received cars, including the Chevrolet Impala and Cadillac CTS, news agency Bloomberg reports.

Barra will take the reins of the company at an interesting time. The Obama administration invested 50 billion dollars in GM in 2009 to prevent it from going belly-up. Earlier this week, the administration announced that it will sell its remaining assets in the auto-maker.

The share of GM has rocketed by nearly 50 per cent from the beginning of the year, following a substantial improvement in the auto-maker's profitability.

The company must now maintain its current momentum, Barra emphasised in the press conference. “I believe General Motors can continue to do great things.”