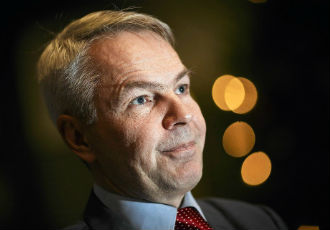 The majority state-owned utility said on Thursday that it will sell its power grids in Finland for 2.55 billion euros.

PEKKA Haavisto (Greens), the minister responsible for ownership steering, hopes that the sale of Fortum's regional and local power distribution grids will enable the energy utility to boost its dividend payments also to the state.

Commenting on the deal to Helsingin Sanomat in Brussels on Thursday evening, Haavisto also voiced his hope that Fortum will invest some of the profits in sustainable domestic targets. “Hopefully, also in sustainable energy.”

Thus far, the energy utility has paid nearly half a billion euros per annum in dividends to the state. “It's important for us to have a productive and profitable company that provides a steady dividend stream,” said Haavisto.

Contrary to demands by several Centre MPs, the minister viewed that the power distribution grid would not have been a worthwhile investment for the state.

“The telecommunications network, for example, is rather a part [of the infrastructure] that could create jobs and and competences in Finland, and appeal to foreign companies,” suggested Haavisto.

The fears over the security of Finland's electricity supply voiced by several MPs were similarly dispelled by Haavisto. While the sale of the nation-wide distribution grid operated by Fingrid would raise valid questions about the security, the sale of a less extensive grid does not, he argued.

“There are many actors, and it's regulated by the law,” Haavisto said, reminding that this particular investment is certain to stay in Finland.

“No one is going to roll up the grid and take it with them. Fortum generates electricity, and it was also in its interest to choose an investor with a long-term commitment to maintaining the grid,” assured Haavisto.

In addition, he reminded that the distribution of electricity is strictly regulated. “You don't get to set your prices freely, and on the other hand the actors have a number of obligations concerning grid maintenance, liability to compensate customers and so on. The same rules apply to the new owner.”

The sale of the power distribution grid became the main talking point of yesterday's question time at the Parliament, with especially members of the opposition parties – and to some extent also members of the Left Alliance – vocal in their comments. Jari Myllykoski (Left Alliance) slammed the deal as catastrophic.

Prime Minister Jyrki Katainen (NCP) revealed during the session that the Government's Cabinet Committee on Economic Policy discussed the deal last week, weighing up especially the strategic significance of Fortum's distribution grid and electricity supply. The majority of the ministers, Katainen said, concluded that the grid is not of strategic significance.