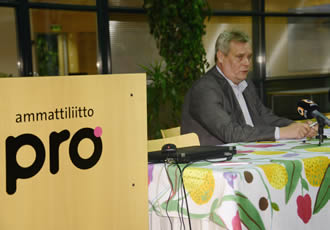 Antti Rinne, the chairperson of Trade Union Pro, has predicted that the majority state-owned airline Finnair will be sold or merged with another airline. In an interview with the Demokraatti magazine, Rinne views that the Asia-oriented strategy selected by Finnair is very brittle, especially with competition on Asian routes projected to intensify.

The schedule of the sale or merger, he says, will depend on the intensity of the competition, on the one hand, and the overall economic situation, on the other. According to Rinne, Finnair has contributed to the decline in its value by reducing key functions, such as engine maintenance and in-flight food services.