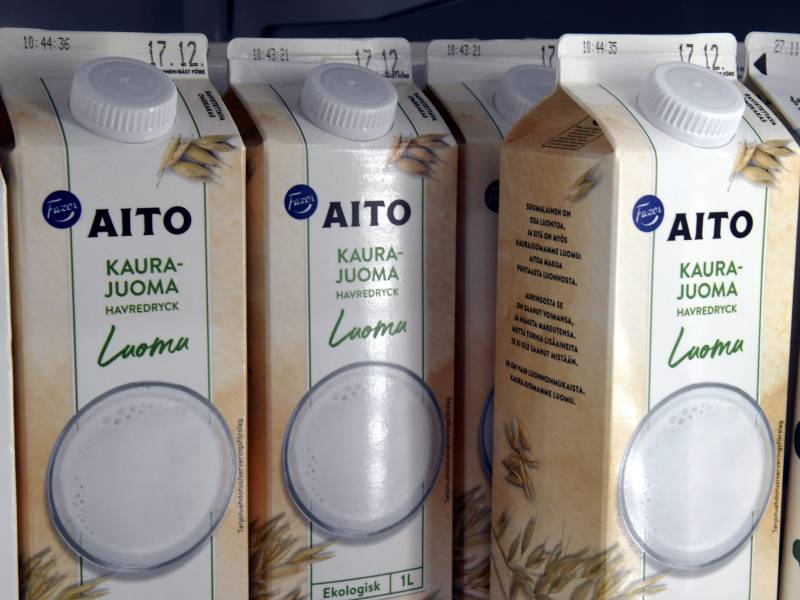 Fazer’s organic oat drink in a supermarket in Espoo in November 2020. The Finnish food giant said this week it is considering focusing exclusively on oat-based products at its production facility in Kouvola, Kymenlaakso. (Heikki Saukkomaa – Lehtikuva)

FAZER on Tuesday announced it will launch consultative negotiations concerning a total of 226 employees at its production facility in Kouvola, Kymenlaakso.

The Finnish food giant estimated that the negotiations could result in the termination of up to 95 full-time positions as it seeks to shift the focus of the plant away from dairy processing exclusively to oat-based products.

Kati Rajala, the head of non-dairy and dairy business at Fazer, said the company is considering pulling the plug on the dairy processing operation out of necessity, to improve the efficiency of the production facility.

“As a small scale dairy processor, we are no longer competitive, and the recent inflation development has compounded our profitability challenges further,” she commented in a press release. “Discontinuing the dairy processing operation would enable us to focus on our plant-based core business, in which the facility will have a key role in future.”

“After a difficult year, the consultative negotiations weren’t a shock, but it was a shock to find out how big a part of the personnel they’ll concern,” the chief shop steward representing dairy professionals at the facility, Altti Sormunen, stated to YLE on Wednesday. “We’re talking about big things. The decision affects not only employees but also, among others, dairy farmers in the region.”

Tuukka Forsell, a deputy mayor of Kouvola, said similarly that the announcement came as a shock.

“The situation is unfortunate especially for the employees, but also for whole Kouvola,” he said to the public broadcasting company. “The city will look to make sure that all those who’ll possibly lose their jobs can find a new job or study place as soon as possible.”