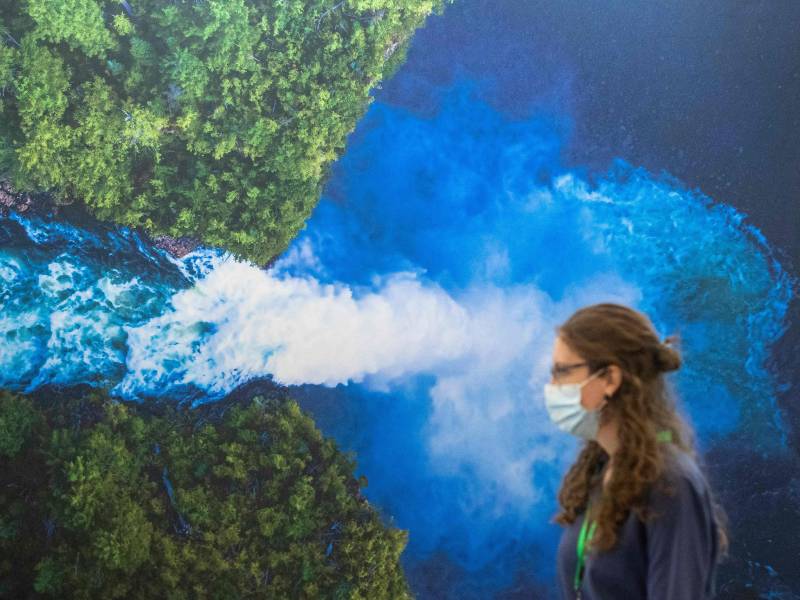 A participant walked past a poster of a waterfall at the UN Biodiversity Conference (Cop15) in Montreal, Canada, on 18 December 2022. Finnish companies stand to benefit from the landmark deal on halting biodiversity loss as it should level the playing field in terms of environmental regulation for companies, views an expert interviewed by Helsingin Sanomat. (Lars Hagberg – AFP / Lehtikuva)

COMPANIES in Finland will benefit from the agreement thrashed out at Cop15 in Montreal, Canada, on 19 December.

Janne Peljo, a senior expert at the Confederation of Finnish Industries (EK), stated to Helsingin Sanomat a day after the at-times fractious two-week meeting that the global landmark agreement on halting biodiversity loss mitigates the risks of companies as their production chains are often directly or indirectly reliant on ecosystems.

The World Economic Forum (WEF) has estimated that over half of the global gross domestic product is dependent on nature and the services it provides – and consequently exposed to the risks of biodiversity loss, the interest group highlighted in a press release on 19 December.

Were deforestation or the pollinator decline to continue, for example, the consequences would be worldwide.

“This is a very good thing from companies’ viewpoint,” he stated to the newspaper. “Companies are waking up to the economic risks of biodiversity loss on a broad scale. It’s limited what trailblazing companies alone can accomplish. Global coordination is necessary.”

The UN Biodiversity Conference (Cop15) saw 190 countries around the world commit to four overarching goals and 23 targets for 2030. The goals include conserving and managing at least 30 per cent of all land, coastal, inland water and ocean areas, restoring 30 per cent of degraded ecosystems, and phasing out subsidies that harm the environment by at least 500 billion US dollars a year.

Peljo told Helsingin Sanomat that the goals and targets send a clear signal and level the playing field for companies.

“When you tighten global requirements [on environmental regulation], Finnish companies are on average better prepared to respond than their global rivals,” he estimated.

Emma Sairanen, a project coordinator at the Finnish Innovation Fund (Sitra), reminded Helsingin Sanomat that companies were mentioned only in passing in the previous biodiversity framework of the UN. “Now we got a very concrete goal for companies,” she commented.

The most relevant targets for companies are targets 14–16, the newspaper wrote. Target 14 states that biodiversity and its multiple values should be integrated fully into, for example, policies, regulations, environmental impact assessments and national accounting within and across all levels of government and sectors.

Target 15 obliges decision-makers to encourage and enable companies – especially major and multinational corporations – to monitor, assess and disclose their risks, dependencies and impacts on biodiversity, and provide information to promote sustainable consumption habits. Target 16, in turn, entails reducing the footprint of consumption equitably, halving global food waste, and significantly reducing both overconsumption and waste generation by 2030.

Peljo pointed out that companies were well represented in Montreal.

“It tells that the theme [of biodiversity] has made it firmly onto the radar of companies and investors,” he interpreted. “For example, there were representatives of central banks giving speeches on biodiversity loss as a risk to general economic stability.”