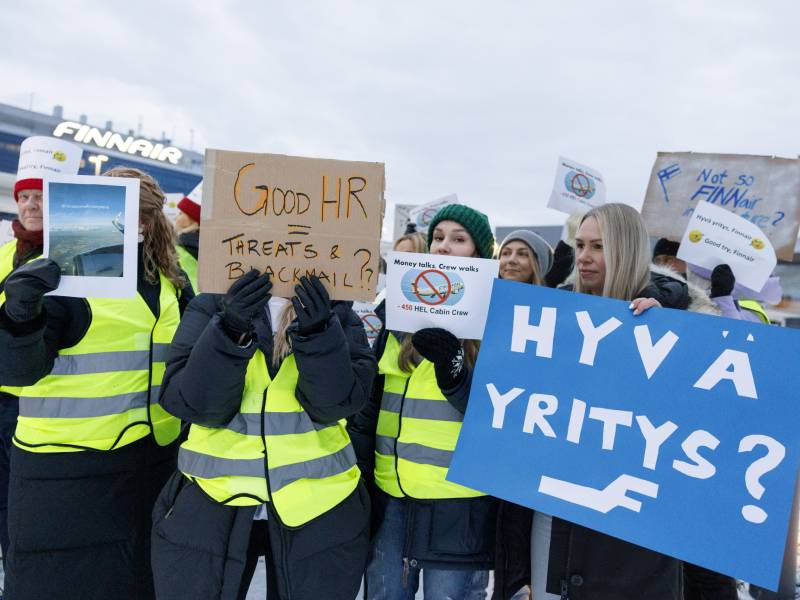 Members of Finnair’s cabin crew held signs in the early stages of a 24-hour walk-out at Helsinki Airport at 3pm on Sunday, 20 November 2022. Finnair on Sunday announced it has had to cancel roughly 100 flights due to what it called an illegal strike. (Seppo Samuli – Str / Lehtikuva)

FINNAIR has cancelled roughly a hundred flights scheduled to take off from Helsinki Airport between Sunday and Monday.

The Finnish majority state-owned airline said the cancellations were necessary because of a walk-out of cabin crew organised by the Finnish Cabin Crew Association (SLSY), part of the Finnish Transport Workers’ Union (AKT).

AKT on Saturday accused Finnair of poor management, human resources policy and the use of redundancies to threaten employees in connection with its plan to subcontract in-flight services on its flights to and from Thailand and the United States.

“Finnair is openly extorting its own employees to be able to slash wages,” stated Ismo Kokko, the chairperson of AKT.

The airline stated yesterday that it will offer passengers affected by the cancellations re-routing options to their final destination, promising to issue notifications of the cancellations to the contact details provided with the booking. Passengers can also verify the status of their flight on the website of the airline.

“We are deeply sorry for the concern and inconvenience this strike is causing our customers, and do our best to reroute the customers as soon as possible,” said Jaakko Schmidt, the chief operating officer at Finnair.

“It is sad that the labour union has chosen the path of an illegal strike instead of negotiations. Throughout the autumn we have discussed savings possibilities with the unions, but unfortunately, we have not been able to achieve a result with cabin crew. We still hope to find solutions together,” he added.

Finnair added that it expects traffic to return to normal during the course of this afternoon. Individual flights, however, may be affected also later because of the non-operation of return flights for cancelled long-haul flights.