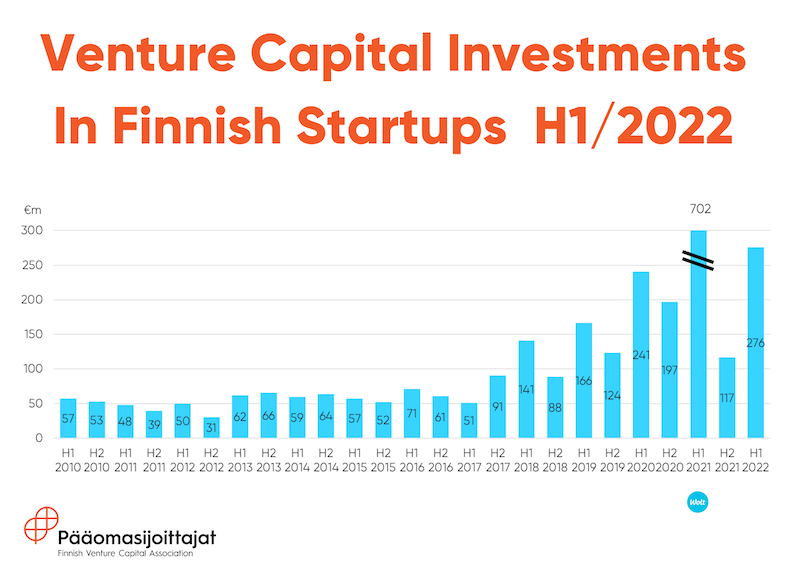 Finnish startups have raised a significant amount of funding from venture capital investors during the first half of the year. The €276 million pot is the second-best half-year in history. Of the amount, €159 million came from domestic investors and €117 million from foreign investors. In particular, the number of seed stage investments increased significantly. The beginning of the year saw high levels of fundraising and investment activity of Finnish venture capital funds.

Satellite imagery firm Iceye, refurbished smartphone marketplace Swappie, green hydrogen producer P2X Solutions, and open-source relational database management system MariaDB are among the Finnish startups that raised large investment rounds at the beginning of the year. In addition, Relex and Aiven have raised significant amounts of growth capital, but having already grown into later-stage scaleups, these investments are not included in the venture capital statistics.

During the first half of the year, investments in the seed stage, i.e. the very early stage startup investments, saw a substantial increase: domestic and foreign venture capital investors invested almost €60 million in early stage startups. During the whole year of 2021, Finnish seed-stage startups raised €43 million in funding, which means that in just half a year the amount has surpassed the entire amount of last year. In 2020, a total of €17 million of seed funding was raised. The number of companies raising seed funding has also increased –51 startups received seed funding in the first half of 2022, compared to a total of 60 companies in 2021.

"The remarkable growth in seed-stage investments is great news for the ecosystem’s future. It means that we have an even broader base for building new success stories," says Pia Santavirta, Managing Director of the Finnish Venture Capital Association.

The investments made by Finnish venture capital investors also reached record levels: during the first half of the year, they invested €228 million in domestic and foreign startups. Finnish VCs operate internationally: 39 % of investments are already made in startups outside Finland.

"The venture capital market is very international. The fact that Finnish investors are making international investments shows that the funds compete in the same league as their European counterparts," Santavirta adds.

The first half of the year has also been very strong in terms of fundraising, with a total of €327 million of raised by Finnish venture capital funds. During the last three and a half years, a total of €1.3 billion has been raised in Finnish VC funds.

There are plenty of investment opportunities according to the private equity barometer, but dark clouds are also forming

According to a recent barometer that follows the market sentiment of Finnish private equity and venture capital investors, Finnish venture capital investors see that the number of good investment opportunities has remained more or less unchanged compared to six months ago. However, more time and resources have been spent on supporting current portfolio companies than before.

Finding foreign investors for portfolio companies has been found a bit more challenging than before.

“There is a certain cautiousness noticeable in the international venture capital market, likely due to the unstable world situation. For example, activity in the third quarter would appear to be clearly lower in the US and European markets than the first half of the year”, says Santavirta.

“It remains to be seen how foreign investors will react to the current situation. With that in mind, it is great that we have Slush here in Helsinki – it is an excellent opportunity to strengthen the networks”, Santavirta comments.

According to the barometer, Finnish investors also estimate that fundraising has become more difficult compared to six months ago.

"Recent years have been very strong in terms of fundraising, which means that there is funding available for promising startups with growth potential. However, we must look after the fundraising environment so that companies with a desire to grow can continue to receive funding”, Santavirta concludes.