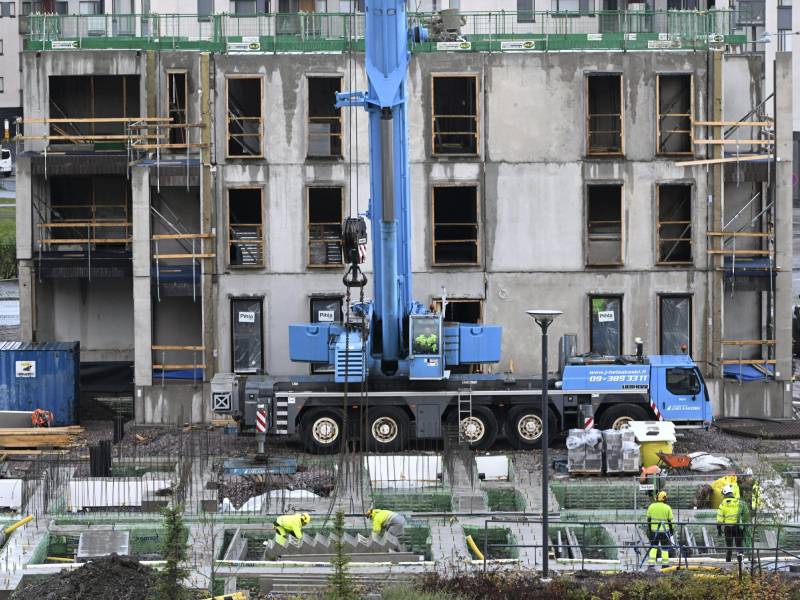 A block of flats under construction in Espoo on 17 October 2022. Rising inflation rates and consumer prices are beginning to have a negative impact on the construction industry, according to the economic review of the Confederation of Finnish Industries (EK). (Heikki Saukkomaa – Lehtikuva)

OUTLOOK for the Finnish construction industry has eroded as inflation and interest rates have sullied consumer confidence, discouraged real estate investors and even dragged down home prices in Helsinki, reports Helsingin Sanomat.

The Confederation of Finnish Industries (EK) on Thursday forecast that the slowdown will test the profitability of construction companies.

“The views of construction companies are presently close to the levels witnessed during the financial and coronavirus crises in terms of both the cyclical situation and outlook,” it said in its economic review. “Production in the construction industry will decrease in the coming months. The pessimistic production expectations are reflected also in employment in the industry. Staff numbers are expected to decline in the coming months.”

Earnings reports and other announcements from the industry have already started to reflect the forecast.

SRV, one of the leading construction companies in Finland, announced last week it will initiate consultative negotiations about shedding up to 45 person-years of jobs and mull over temporary lay-offs to adapt to what is expected to become a more challenging market environment.

CEO Saku Sipola said the company expects the volume of residential construction to decline toward the end of the year. The market environment has already started delaying the commencement of expected construction projects.

“We anticipate that inflation, growing interest rates and weakening consumer confidence will cut into demand at least during the winter ahead,” he stated in the interim report.

SRV carried out a broad-based financing agreement in the second quarter of the year, effectively relieving itself of net interest-bearing debt and bracing itself for the increasingly challenging environment, according to Sipola. The company last week lowered its revenue guidance for the year from 800–860 million to 770–820 million euros and profit guidance from 15–25 million to 17–23 million euros.

YIT, the largest construction company in Finland, on Thursday warned that home sales may fall short of expectations this year as rising interests and consumer prices continue to gnaw away at consumer demand.

CEO Markku Moilanen told that the company has identified a number of measures to enable itself to overcome the looming downturn. While it is seeking to improve the productivity of its operations and identify future growth opportunities, it also intends to improve operational efficiency and generate savings.

“We are disciplined in our cost management and will pursue further opportunities to increase efficiencies in both the short and the long term,” he said in the interim report.

The company reiterated its assessment that it will complete fewer residential units than last year but that the operating profit from its continuing operations will exceed the 85 million euros posted last year.

Lehto Group reported early last month that it is preparing for growing market uncertainty by discussing measures to generate cost savings equivalent to about 80 person years with its staff. The consultative negotiations, it said, are part of an adaptation package designed to create cost savings of up to seven million euros for 2023.

The Confederation of Finnish Construction Industries (RT) in mid-October predicted that construction will increase by two per cent this year – on the back of earlier orders and strong residential construction – but decrease by roughly two per cent in 2023. The pace of construction has been declining since spring and is expected to accelerate toward the year-end.

“Uncertainty is currently high, and a recession is probable. The change is already visible in construction even though it is a post-cyclical sector that reflects economic changes belatedly,” commented Aleksi Randell, the managing director at RT.