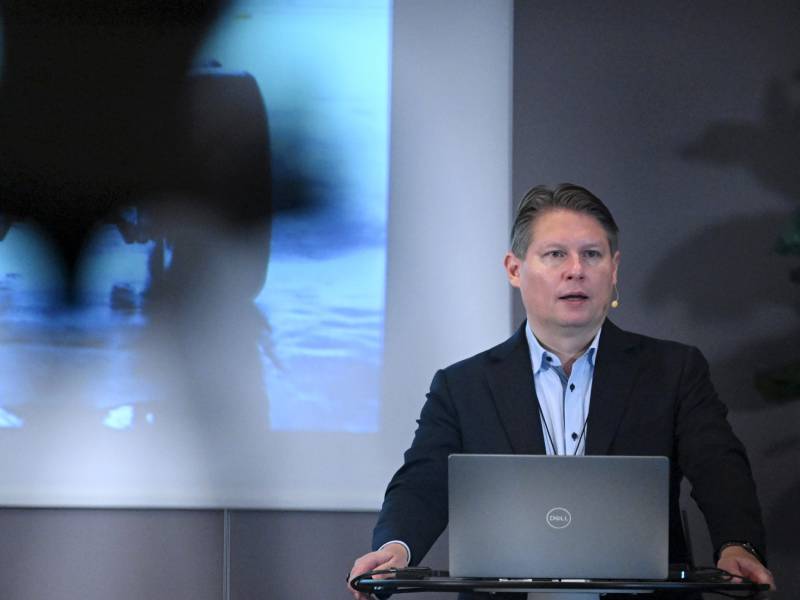 Topi Manner, the CEO of Finnair, spoke at a press conference held after the majority state-owned airline’s earnings call in Vantaa on Friday, 28 October 2022. Manner viewed that despite taking a step in the right direction in the third quarter of the year, the airline has a long road ahead of itself to nurse itself back to full health. (Jussi Nukari – Lehtikuva)

THE REVENUE of Finnair surged by more than 260 per cent year-on-year to 719.2 million euros between July and September, enabling the majority state-owned airline to post a comparable operating profit of 35.2 million euros.

“Our comparable operating result turned positive for the first time since the last quarter of 2019,” highlighted Topi Manner, the CEO of Finnair.

The development, he estimated, is a result of the measures adopted by the airline to reduce costs, improve sales and optimise revenues. The result for the period, though, was 37.2 million euros in the red due to factors such as record high jet fuel prices, unfavourable exchange rates, the closure of Russian airspace and the lingering effects of the coronavirus pandemic – namely, the travel restrictions in China.

Manner estimated that although a positive result in what is the busiest quarter is a step in the right direction, he and his colleagues have “a long journey” ahead of themselves to nurse the company back to health.

Finnair revealed that the number of passengers it carried in the third quarter of the year increased by over 255 per cent to 2.8 million. As its available seat kilometres rose by almost 155 per cent from roughly 3.29 billion to 8.36 billion, its passenger load factor almost doubled from 41.6 per cent in 2021 to 80.1 per cent in 2022.

Finnair in September unveiled its new strategy in response to the extended flight times and operating costs of its strategic cornerstone, traffic to and from Asia. The purpose of the strategic re-think, it said, is to balance its flight network and trim its fleet slash unit costs by 15 per cent compared to 2019 and restore its earnings to at least five per cent by mid-2024.

A key to the new strategy is a codeshare agreement with Qatar Airways.

“Strategy implementation will proceed at pace in every area and needs contribution from all stakeholders,” Manner said on Friday.

Finnair has reduced its costs by roughly 200 million euros over the past 30 or so months. It announced earlier this autumn its decision to initiate consultative negotiations that could lead to the termination of 200 jobs worldwide, including 120 in Finland.