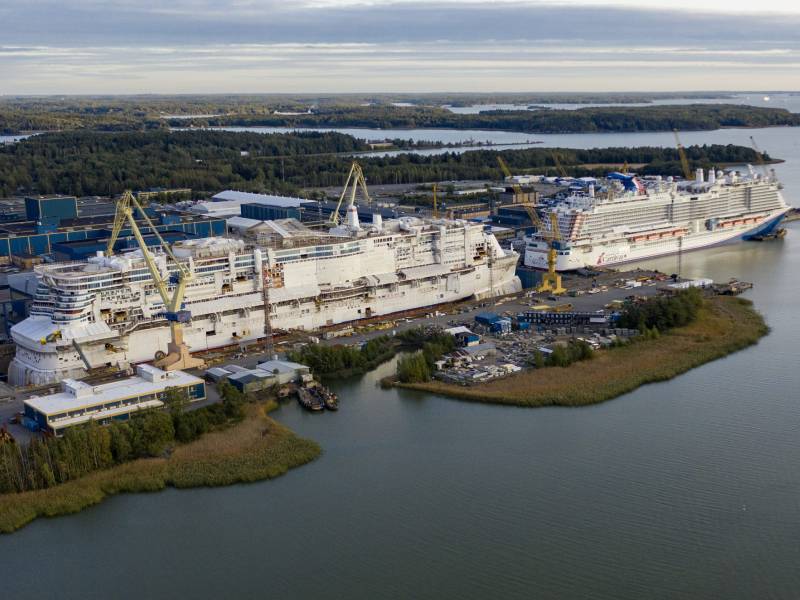 Meyer Turku’s shipyard in Turku in September 2020. Helsingin Sanomat on Friday reported, citing three independent sources, that the shipyard is seeking up to 200 million euros in emergency financing from the Finnish state. (Roni Lehti – Str / Lehtikuva)

TWO MAJOR SHIPYARDS in Finland have turned to the government for emergency financing due to financial difficulties, Helsingin Sanomat revealed on Friday.

Meyer Turku is presently engaged in negotiations over up to 200 million euros in emergency state financing, according to information the daily newspaper obtained from three independent sources. Rauma Marine Constructions, in turn, received a capital loan of 40 million euros in the summer due to challenges at its shipyard in Rauma, Southwest Finland.

Timo Meyer, the CEO of Meyer Turku, did not respond to a request for comment from Helsingin Sanomat on Friday.

Meyer Turku employs around 2,000 people directly and another 7,500 people through the network of sub-contractors serving its shipyard in Turku. The shipyard reported revenue of 1.1 billion euros and a net loss of more than 17 million euros in 2021.

The shipbuilding company highlighted in its financial report for last year that competition in the cruise ship space is fierce due to the establishment of new shipyards in China, Europe and South Korea. The shipyard has also had to deal with the component and material shortage caused by the coronavirus pandemic.

The Rauma shipyard finds itself in greater financial difficulty mostly for the same reasons, according to Helsingin Sanomat. Finnish Industry Investment (Tesi), the newspaper’s sources said, granted the shipyard a capital loan of 40 million euros last summer, following a decision by the Ministerial Committee on Economic Policy.

Tesi is a state-owned venture capital firm tasked with facilitating the operations of small and medium businesses and, under certain conditions, the structural reform of industries.

Rauma Marine Constructions posted a net loss of 58.4 million euros for last year on revenue of 154.2 million euros. In addition to its staff of 210 people, about 500 employees of its sub-contractors are working at the shipyard.

The shipyard has repeatedly failed to deliver its vessels on time, a fact it has explained with the operational disruptions caused by coronavirus infections and delays in the deliveries of sub-contractors caused by the pandemic. Some sources familiar with the operations, however, view that the delivery delays are attributable to lack of expertise and poor management, wrote Helsingin Sanomat.

Rauma Marine Constructions has been assigned to build four military vessels to the Finnish Navy. Also their deliveries have been delayed significantly.