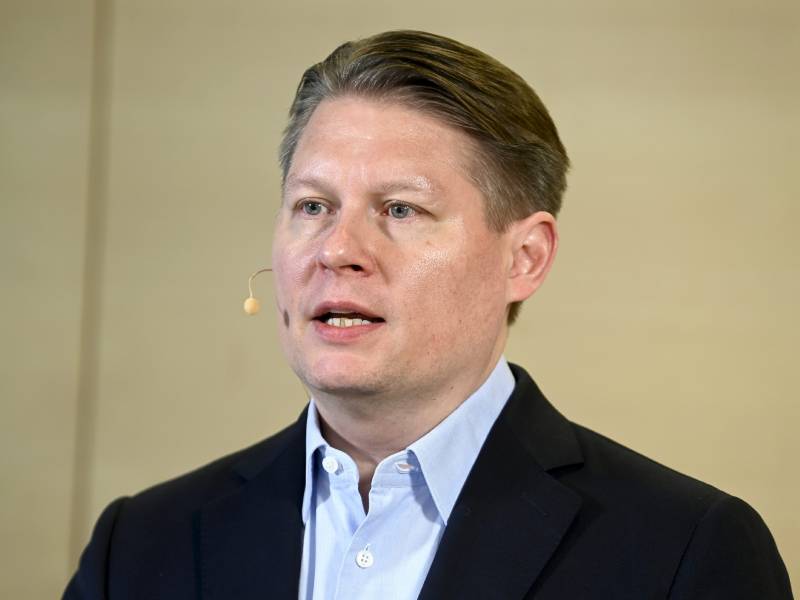 Topi Manner, the CEO of Finnair, reacted at the earnings call of the Finnish majority state-owned airline at Helsinki Airport on Wednesday, 27 April 2022. (Vesa Moilanen – Lehtikuva)

The Finnish majority state-owned airline stated that its operating environment has undergone a dramatic change due to travel restrictions in China, Japan and South Korea, and the shutdown of Russian airspace.

The change is two-sided, though, as the coronavirus pandemic easing its grip has resulted in a normalisation of travel in southern parts of Asia – namely, India, Singapore and Thailand, as well as Europe and the United States.

“Over the past two years, Finnair has encountered two major disruptions of historic proportions: a global pandemic and the Russian invasion that resulted in the closure of the Russian airspace,” highlighted CEO Topi Manner.

“Restrictions and lockdowns related to the omicron weakened demand especially in January and February. As a result, the anticipated ramp-up of demand stalled for two months and our revenue […] decreased quarter-on-quarter, amounting to 400 million euros in the first quarter,” he added. “Our comparable operating result remained strongly negative at -133 million euros mainly driven by the high fuel price and the omicron impact on costs and demand.”

Except for China and Hong Kong, Asian markets are expected to gradually open for travel toward the end of the second quarter, according to Finnair.

The airline expects its second and third-quarter capacity, measured in available seat kilometres, to fall about 70 per cent short of the levels of 2019. The airline, though, has already taken measures to monetise its unused capacity and leased aircraft and crew to other airlines for the summer season, raising the total capacity deployment to nearly 80 per cent.

“We have quickly found profitable use for our idle aircraft capacity by leasing aircraft with crew to other airlines. This generates income for us and provides work for a significant number of pilots, cabin crew and technical staff. Thanks to these arrangements, we are able to avoid laying off Finland-based employees during the summer,” commented Manner.

“We continue to review our fleet plan, evaluating both additional wet lease opportunities as well as the potential sale of idle aircraft.”

Finnair on Wednesday also announced it is seeking additional permanent cost savings of 60 million euros in distribution, aircraft leases and continuous operational improvement in the first phase of its new cost-cutting programme. The programme, it added, will be complemented as the airline figures out its long-term response to the airspace closure of Russia.

“Our cash position is strong and the 400-million-euro hybrid loan granted by the state of Finland, which is fully undrawn, supports our balance sheet,” said Manner.

Cargotec posted a 26-per-cent increase in comparable operating result despite the logistics and supply chain-related problems associated with the coronavirus and the component shortage caused by the war instigated by Russia. The Finnish manufacturer of cargo-handling equipment said it has responded to the challenges by continuing the price increases it began last year and stepping up active supplier co-operation and efforts to build alternative supply chains.

The company announced earlier this month it has initiated the divestiture process of its operations in Russia over the war in Ukraine. The 700-employee, four manufacturing-plant operation had generated almost 100 million euros in revenue in 2021, representing less than three per cent of total revenue.

Konecranes failed to meet market expectations following the rejection of its proposed merger with Cargotec by the UK’s Competition and Markets Authority. The Finnish manufacturer of overhead cranes said it turned a first-quarter operating loss of 50 million euros on revenue of 672 million euros, the numbers falling short of expectations by 70 and 110 million euros, respectively.

“Konecranes’ first quarter was mixed. We booked record-high orders, but at the same time our profitability declined,” said Tero Ottola, CEO of Konecranes.

Kone stated that its comparable quarterly operating result dropped by more than 50 million euros to 195 million euros, largely due to the strict coronavirus measures in place in China. The outlook for the second quarter, it added, is contingent on the measures being lifted and the lifting resulting in a rapid recovery.

Nokian Tyres said Russia’s war in Ukraine overshadowed what was a solid quarter in light of performance indicators. CEO Jukka Moisio predicted that the war and sanctions will have an impact on the tyre manufacturer’s performance starting especially in the third quarter, even though their final impact on the operations remains impossible to gauge. Russia accounted for 20 per cent of the company’s net sales and 80 per cent of tyre output in 2021.

Nokian Tyres reiterated that it is accelerating its investments in production capacity in Europe and ramping up the capacity of its factories in Nokia, Finland, and Dayton, the US.