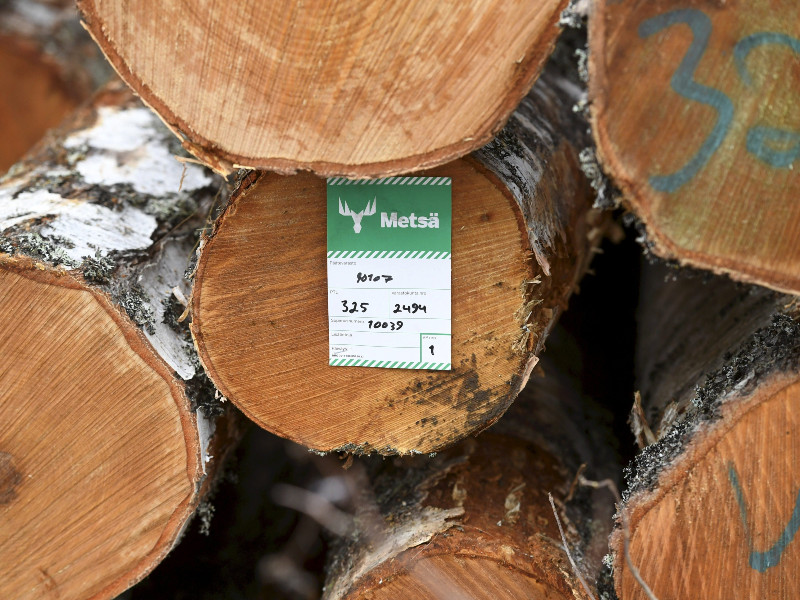 A pile of logs bound for Metsä Group, the parent company of Metsä Fibre, in Keuruu on 15 November 2020. (Heikki Saukkomaa – Lehtikuva)

ANTITRUST OFFICIALS at the European Commission on Tuesday began unannounced inspections on the premises of several forest industry companies in Europe, including Metsä Fibre, Stora Enso and UPM in Finland.

The inspections continued yesterday on at least the premises of Metsä Fibre and Stora Enso, according to Helsingin Sanomat.

The European Commission on Tuesday revealed that the inspections are part of an effort to determine whether wood pulp producers have violated antitrust rules prohibiting cartels and restrictive business practices. It underlined that as unannounced inspections are “a preliminary step” into suspected anti-competitive practices, the carrying out of such inspections does not signify that the companies are guilty of any violations.

Each of the Finnish companies targeted holds a roughly four-per-cent share of the global pulp market, according to data compiled by Afry.

The antitrust officials were accompanied by their counterparts from national antitrust authorities for the inspections. Timo Mattila, the head of the competition unit at the Finnish Competition and Consumer Authority (KKV), told Helsingin Sanomat on Tuesday that the European Commission usually utilises national authorities in such efforts.

“Our duty is to assist in the commission’s investigation. The inspections require, among other things, knowledge of the local language and help with a number of practical things,” he said, declining to speculate on the impetus for the inspections.

“I can’t comment on that, and I don’t even know all the details because we’re truly involved in an assisting role.”

Petri Kuoppamäki, a professor of corporate law at Aalto University, said the European Commission’s investigations into suspected anti-competitive practices are usually prompted by a denunciation from one of the participating companies. Antitrust laws state that a company that denounces a cartel may be exempt from penalty payments.

It would be practically impossible for antitrust authorities to unearth evidence of price co-operation between large corporations without a denunciation.

The objective of the inspections is to find incriminatory evidence of price co-operation, such as e-mails, meeting memos or internal memos detailing such illegal activity.

“I won’t comment specifically on this case, but generally speaking the officials carrying out the inspections must know pretty precisely whose office and computers they should start with in search of evidence,” Kuoppamäki said to Helsingin Sanomat.

He also reminded that the inspections could not be carried out without justified suspicion. It could arise not only from a denunciation, but also from observations made by a client about the activities of sellers.

“You can’t carry out an inspection like this just in case, but you must have concrete suspicions,” he clarified, again on a general level, to YLE.