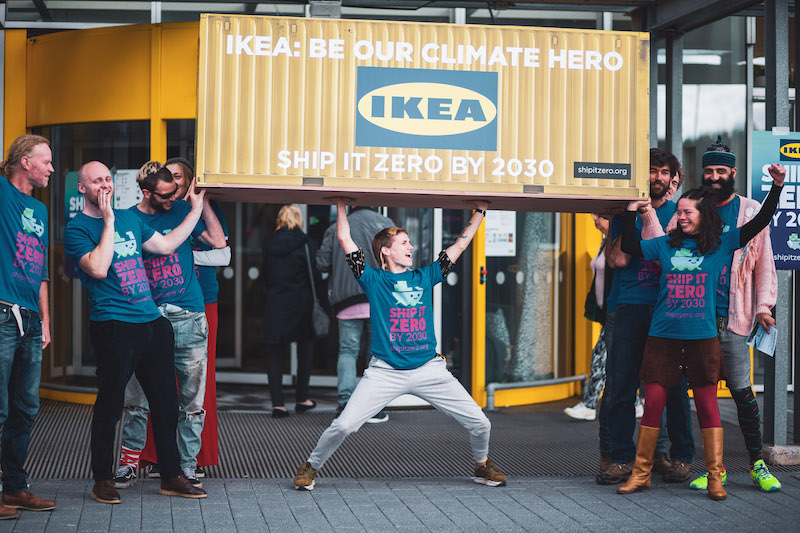 "We are demanding IKEA to invest in wind, batteries, and 100% renewable hydrogen-based fuels for it's shipping. These are 100% carbon zero and expected to become available by 2024. For prompt emission reduction they can demand ships slow their speed immediately," said Nicole Caodie, action coordinator for Pacific Environment.

Led by environmental organizations Pacific Environment and Stand.earth, the Ship It Zero campaign is calling on some of the world's largest retail companies — including IKEA, Amazon, Target, and Walmart — to transition to 100% zero-emissions cargo shipping vessels by 2030. As one of the leading contributors to global greenhouse gas emissions, international maritime shipping must rapidly decarbonize if the world is to keep global warming at or under the 1.5 degrees Celsius target that scientists say is needed to avoid the most catastrophic consequences of the climate crisis. Abandoning fossil-fueled ships immediately would also improve public health for port communities, who experience high rates of asthma, cancer, and premature death due to ship exhaust and port pollution.

"IKEA can be a hero in the story that gets told about the most decisive decade of human history," said Dawny'all Heydari, Ship It Zero Campaign Lead, Pacific Environment. "It's time to set sail on zero-emissions cargo ships and break retailers' dependence on ships that pollute our ports, harm our health, and obstruct our opportunity to meet our climate objectives."

"IKEA and other major retail brands are the lynchpin in the massive, fossil-fueled ocean shipping industry, and can wield enormous power to transform this sector. The false climate solutions touted by the maritime industry, like carbon credits, biofuels, and LNG, are going to sink our livable future before we've even set sail. Corporate cargo customers like IKEA must step up to the leadership helm by taking immediate steps to reduce their maritime climate pollution and committing to zero-emissions shipping by 2030, " said Kendra Ulrich, Shipping Campaigns Director, Stand.earth.

IKEA's ambition is to be climate positive by 2030, and clearly wants to be a sustainability leader. At the end of last month, Jesper Brodin, Chief Executive Officer of Ingka Group (IKEA), was appointed new Chair of The B Team, which is a group of global business and civil society leaders working on better business practices for the wellbeing of people and the planet. He said that he wants to be a voice for "people and the planet." However, its commitment is insufficient as it only calls for a 70% reduction in greenhouse gas emissions for transport by 2030, which does not go far enough. The Ship It Zero are calling on IKEA to set the market signal for no more fossil-fueled shipping this decade to protect public health and keep global warming under 1.5 degree Celsius and to truly lead on sustainability.