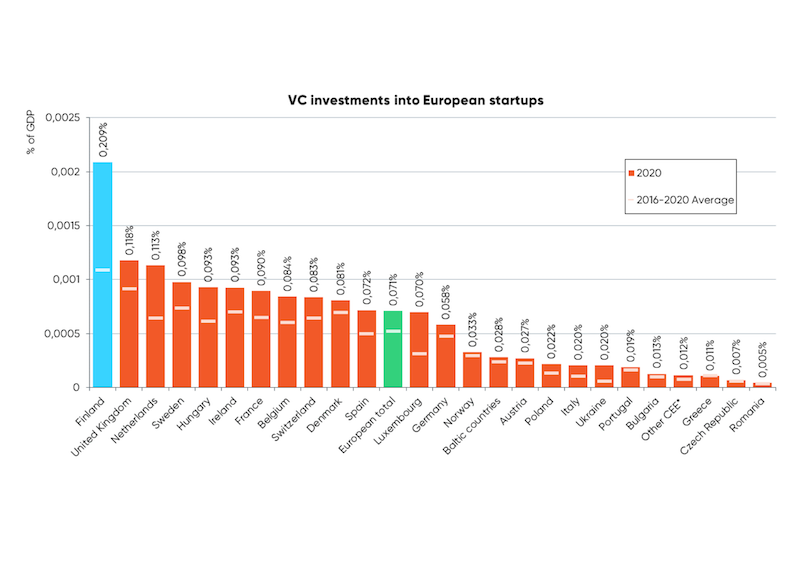 According to recent Invest Europe statistics, Finnish startups receive the most venture capital funding in Europe, when the invested amount is examined in relation to gross domestic product. While Finland has already held the top spot for three consecutive years, in the 2020 statistics Finland stands out from the crowd by far.

In the statistics, the total amount of investments is presented in relation to each country's gross domestic product. When these numbers are compared, Finland clearly stands above the rest of Europe. In comparison, Finland is 77% ahead of the UK, which holds the second position. Finnish startups received twice as much funding as their Swedish counterparts (in fourth position) when the sizes of the national economies are taken into account.

Finland's position at the top of the comparison is not a one-off case – the development has been continuous. However, 2020 saw a jump to a completely new level, when Finnish startups once again raised a record amount of VC funding, €495 million. During the year, the amount of domestic VC investments doubled, and foreign VC investments increased by 57%.

In addition, Finnish startups have already raised numerous significant investment rounds in 2021 – for example, Wolt (€440m), Aiven (€84m) and Oura (€83m) – most of the investment amount received from VC investors. Thus, the positive development continues, and it seems that records will be broken in 2021 as well.

"Finland is clearly growing into a significant startup hub. Relative to the size of the national economy, we are now 'European champions' of startup funding. This great news will attract more top talent and capital to Finland, which is crucial for keeping up with the international competition," comments Pia Santavirta, Managing Director of the Finnish Venture Capital Association.

Finland's number one position in the statistics is driven by large investment rounds in later-stage startups. It is crucial for the future that new startups are also created, and that there is funding available for them. The number of Finnish venture capital investors has virtually doubled in the last five years, as sixteen new fund teams have raised their first VC fund. A large proportion of these funds invest especially in early-stage startups.