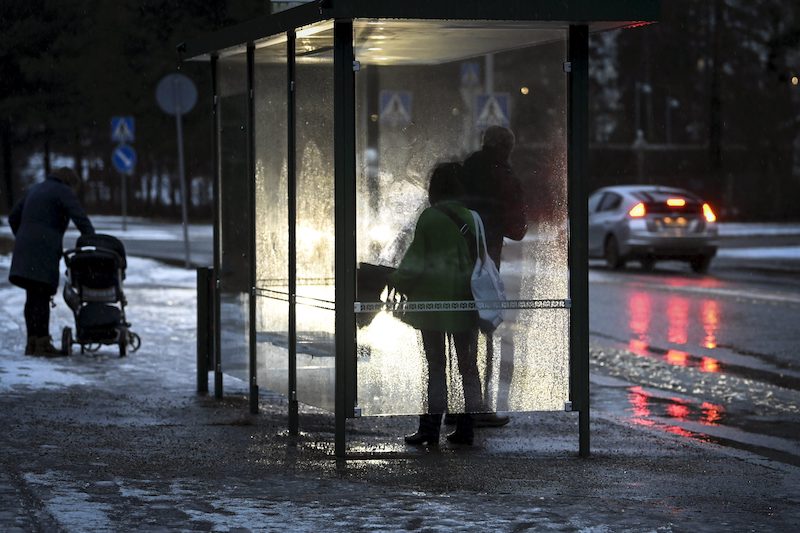 A commuter at a bus stop in central Helsinki (Image: Lehtikuva)

THE EMPLOYMENT GAP BETWEEN FOREIGNERS AND NATIVE-BORN FINNS has been an issue at the forefront of policy discussions for years now, with much attention being paid to the fact that unemployment among the foreign-born population is almost four times higher than the overall unemployment rate.

While repeated policy announcements have been made in recent years that aim to attract skilled international workers to Finland, comparatively little has been done to address the situation of immigrants already in Finland. An issue that has garnered even less attention concerns pay inequalities between foreign-born workers and native Finns.

Research from Statistics Finland shows that immigrants earn, on average, 25% less than native-born Finns. In addition, foreign-born individuals are significantly more likely to require housing benefits and income support, often as a result of under-employment and poor pay.

While it is clear that, in general, earning prospects for those with an immigrant background in Finland are bleaker than those of their native-born counterparts, it is less clear how these patterns of inequality play out.

With the dozens of responses we received, what has emerged is a patchwork of exploitation, with some employers offering salaries to immigrant workers that fall well below those agreed by unions or defined as “reasonable” by the Employment Ministry. Many people have also shared experiences of being mistreated by employers in a way that they feel is explicitly linked to their foreign nationality, while watching their Finnish colleagues receive promotions and better pay for the same work.

Although it is not possible to determine whether the alleged maltreatment at the hands of employers is due to the person’s foreign background, this anecdotal evidence suggests that there is a systemic issue when it comes to the treatment of foreigners on the Finnish labour market and fair pay.

It is also clear that many foreigners are not aware of the rights that they have under existing labour legislation and that it is not always clear what action for recourse they might have if they feel they are being exploited.

One such person is Charlotte*, an EU national who is about to graduate from a master’s course at the University of Helsinki and who recently applied for a marketing management position with a well-known sustainable fashion brand in the city. The position, which was advertised as “English only” and involved a lengthy, multi-day interview process, claimed to offer a “competitive salary”. Upon being offered the job, she was shocked to learn that the salary offer would be €800 a month for a 40-hour week, equivalent to less than 5 euros per hour.

“I felt totally exploited”, remarked Charlotte. “When you think of Finland you think of fair pay and a strong work-life balance. The worst part is that, given how dire the job market here is for foreigners, I was actually considering taking it”.

Another person who echoes this sentiment was Harinder, who went through a lengthy recruitment process with a large Finnish consulting firm, only to be offered a salary that was considerably lower than originally quoted and well below the industry standard for someone with his experience.

Harinder believes that, since the recruitment process was “blind” and that he speaks Finnish, it was only once they actually met him in the interview rounds that they presented a lower salary offer and lower position, due to his race and nationality.

“I know this might seem like an exception in a country where many foreigners don’t even get a call-back, let alone an interview, but it is demoralising to see Finnish companies try to get away with treating foreign applicants like this”, said Harinder.

Experiences like these were not limited to white-collar roles. Sara had lived in Finland for years and had struggled to find consistent work, before being offered a role as a waitress from a fellow foreigner she had met during her Finnish citizenship exams.

The role, at a busy restaurant in Helsinki, paid less than five euros per hour, far below the collective minimum wage agreements for the hospitality sector. Sara also said that she knew others working for similar rates and that it seems that some employers take pains to avoid leaving any kind of payroll documentation, to avoid potential legal troubles.

Others also said that a lack of general knowledge amount pay rights and wage agreements among foreigners leaves them more vulnerable to exploitation. Tia, an American who spent years working for a Finnish gift packing company before learning that her Finnish counterparts were being paid more for the same work, described the ordeal as a learning experience.

“Overall, it was a good opportunity to educate myself about Finnish unions and TES agreements,” said Tia. “It also made me appreciate the help available from unions and their strong presence in Finnish working life”.

Likewise, Charlotte also learned more about existing wage agreements and protections after her experience, and now believes that “more should be done to educate foreigners about their rights – especially at the universities”.

“This whole experience has made me much more hesitant towards staying in Finland and applying for jobs here”.

In addition, Kristina Sweet, CEO of The Shortcut, a Helsinki-based non-profit that helps match Finnish startups with local and foreign talent, says that there are “a number of challenges for foreigners” in the Finnish job market that can pave the way for instances of exploitation.

“It can take foreign jobseekers much longer to find meaningful work, which can sometimes lead to them taking jobs they are overqualified for, which in turn can mean a lower salary. It can also be that companies know that the jobseeker has fewer options, so they squeeze them for a lower salary”.

For this piece, we also spoke to the Finnish Ministry for Economic Affairs and Employment (TEM), who were keen to share information and advice for any person in Finland who believes they are being underpaid or exploited by their employer.

According to Finnish law, if a foreign employee is grossly underpaid, the conduct can amount to a criminal offence, such as workplace discrimination. In this case, it becomes a police matter.

An employee can also contact the Occupational Safety and Health Administration for advice on wages and work discrimination. There is no minimum wage law in Finland. However, the employer is bound by the wage provisions of the applicable binding collective agreement.

TEM also stressed that anyone who is subject to or aware of pay discrimination can reach out to the authorities anonymously.

“An employee can also, on a confidential basis, ask advice on wages and work discrimination from their trade union or the Occupational Safety and Health Administration”.

*All persons interviewed for this piece requested to remain anonymous out of fear of hurting their future job prospects in Finland. Therefore, all names and identifying details in this piece have been changed.