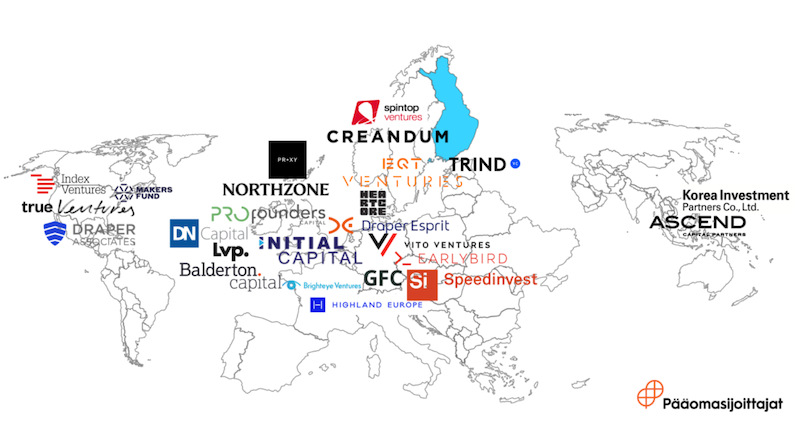 "The Finnish startup ecosystem has been developed ambitiously, and it shows in the results: The total amount of funding received by Finnish startups has more than quadrupled in less than ten years, and Finnish startups raise the most venture capital investments in Europe relative to GDP," Pia Santavirta, Managing Director at the Finnish Venture Capital Association (FVCA), says.

"The knowledge of different markets and wider networks brought by international investors provide a solid foundation for domestic startups to receive support and grow into internationally significant players," Janne Holmia, the new Chairperson of FVCA and partner of the Nordic private equity firm Verdane, continues.

The venture capital investors that have invested in Finnish companies come from 42 different countries. The most active European investors investing in Finnish startups come from the United Kingdom (41 venture capital investors), Germany (24), and Sweden (22). Globally, most investments are made to Finland from the United States (83). A total of 114 VC investors from outside Europe have invested in Finland since 2013.

The most active foreign venture capital investor in Finland is Heartcore Capital, which has made 16 investments in Finland. The Danish VC firm has, for instance, invested in multiple gaming companies such as Futureplay, Seriously and Traplight Games.

The second most investments have been made by EQT Ventures, which has invested in Wolt and Varjo, for example. The third most active investor is Creandum, whose investments include the likes of Small Giant Games and KNL Networks. Both EQT Ventures and Creandum are globally recognized early-stage venture capital investors from Sweden.

The next most active foreign VC's in Finland are the British investors Northzone and Initial Capital. The most active investor from the United States is True Ventures, a California-based venture capital firm with over 2 billion dollars in assets under management.

Cooperation between Domestic and Foreign Investors

When looking at the most active Finnish co-investors in the international funding rounds to Finnish companies the top spot goes to Lifeline Ventures with participation in 40 rounds. Lifeline manages Finland's biggest VC fund. Second comes state-owned Tesi, which has participated in 33 international funding rounds. Inventure (24), founded already in 2005, and software-focused OpenOcean (17) are the next most active.

"Building new global success stories requires strong cooperation between domestic and foreign investors. The international networks built by Finnish investors over the years have proved their worth even amid the COVID-19 crisis. Finland has been one of the fastest-growing startup hubs in Europe," Pia Santavirta comments.

"We always make investments together with local angel or venture capital investors. The Finnish startup ecosystem is particularly interesting right now, which is why we expanded our team to Finland at the beginning of the year," Sean Seton-Rogers, partner at the UK-based venture capital firm PROfounders Capital, says.

The report of foreign venture capital investors in Finland conducted by the FVCA is based on data collected from deals published between 2013 and February 2021.