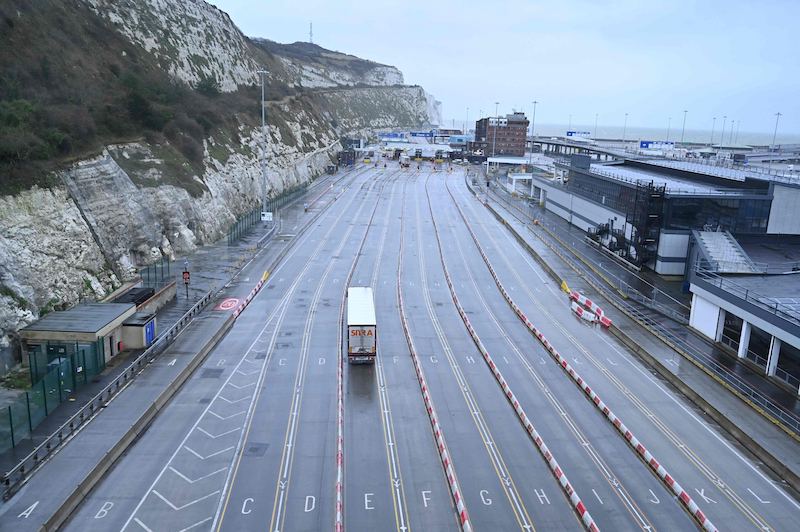 A lorry enters the Port of Dover, southeast England following Britain's departure from the European Union. - Exports of British goods to the European Union collapsed by a record 41 percent in January after the nation finalised its divorce from the bloc, official data showed on March 12, 2021. LEHTIKUVA / AFP

Careful preparatory work before the UK’s withdrawal from the EU enabled smooth foreign trade and commercial traffic during and after the transition. For Finnish Customs, Brexit had a significant impact on the customs clearance volumes, but also on customer guidance, information systems and customs control.

At the turn of the year, the United Kingdom became a non-EU country. The change influenced the everyday activities of many Finnish companies, as goods imported and exported between Finland and the UK had to be cleared through customs from the start of the year. However, the increased customs clearance volumes were evened out by the decrease in the foreign trade of goods last year. The effects on foreign trade were clearly visible in January, when the foreign trade statistics of Finnish Customs showed that the export of goods from Finland to the UK decreased by more than 20 per cent and that the import crashed by more than 50 per cent.

“Especially the imports by small and specialised companies have decreased notably. Most of the export is carried out by bigger companies, who already know their way around the customs formalities. The January trade with the UK decreased because of Brexit, but also due to the stocking up in December”, says Mr Olli-Pekka Penttilä, Director of Statistics.

Brexit increased the need for customer service provided by Customs – the number of customer contacts grew by more than 60 per cent compared to last year. In order to make the transition easier for customers, Customs gathered information and guides about Brexit on the Finnish Customs website, and a Brexit helpline was launched to help with changes in the customs clearance process. The new formalities raised the most questions.

“Right now, companies are in particular need of advice on how to declare their goods and how to use different customs procedures. Import companies have clearly needed our customer advice the most, especially with regard to the origin of goods. Due to Brexit, we have had lots of customer contacts from new business customers with no previous experience of customs matters” says Mr Tom Ferm, Director of Customer Relations and Tax Collection.

In the background, preparing for the UK’s withdrawal from the EU required extensive changes in the information systems of Customs; the development and testing was started well in advance. In the end, the transition did not cause any disruptions in the systems. Customs also cooperated closely with different authorities and arranged many stakeholder meetings, in which customers were informed of factors influencing customs clearance.

In customs control, the transition was softened by the dramatic decrease in the amount of traffic and passengers due to COVID restrictions. At the turn of the year, passenger flights between Finland and the UK were suspended at times, which had a particular impact on postal consignments.

“All in all, the Brexit process has been smooth with regard to customs control. We have paid special attention to medicine consignments transported as postal consignments or express freight, for example. As of the beginning of 2021, it is no longer possible to receive medicines by mail from the UK. This has required some additional information to customers”, says Mr Mikko Grönberg, Director of Enforcement.

Law enforcement cooperation with regard to requests for legal and administrative assistance as well as information exchange has also continued via the existing channels without any problems. During the Brexit process, the bilateral customs cooperation between Finland and the UK has been facilitated by the customs liaison officer in the UK.

“Our cooperation with the UK has long traditions, and the UK is an important and useful partner for Finnish Customs, also when it comes to law enforcement”, says Mr Jussi Hulkkonen, Head of the International Affairs Unit at the Enforcement Department.