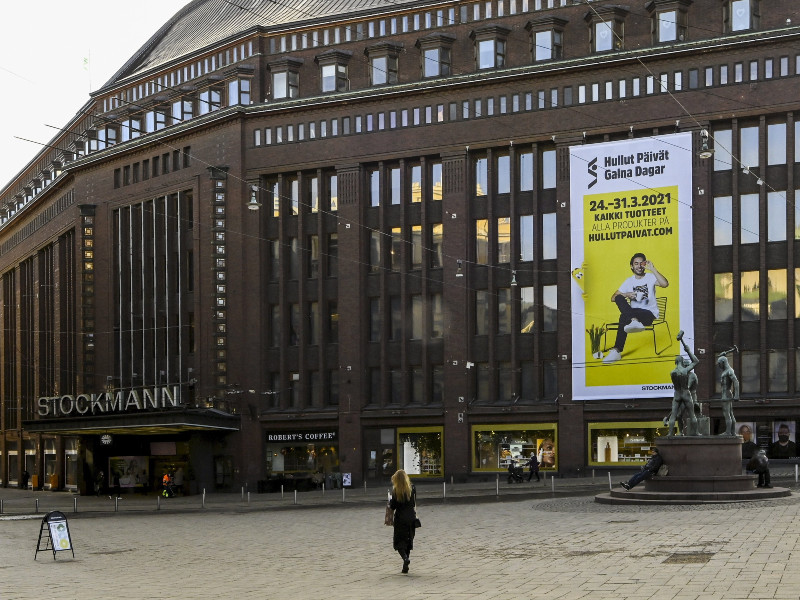 Stockmann on Friday said it is preparing to shut down all of its department stores in response to the possible adoption of movement restrictions in Finland. (Markku Ulander – Lehtikuva)

STOCKMANN has announced it is preparing to temporarily shutter all of its department stores in response to the possible introduction of movement restrictions in Finland.

The Finnish department store icon stated last week that it will initiate consultative negotiations with all of its 1,200 staff members in the country, citing the financial impact of the tightening of measures to curb the spread of the new coronavirus.

“The objective is to prepare for adjusting the number of staff to a situation where customers cannot visit the department stores due to tougher coronavirus restrictions and to the immediate decline in revenue caused by the situation,” it stated.

Jari Latvanen, the CEO of Stockmann, stated to Helsingin Sanomat that all department stores will likely have to be shut down if the restrictions presented by the government are passed by the Finnish Parliament.

“We’re now waiting to hear back from the Parliament and Constitutional Law Committee. It’s important that the situation is examined from the viewpoint of antitrust laws. Because the situation is unclear, we have to immediately launch consultative negotiations covering the whole concern,” he commented.

The statutory process will begin this week with a view of temporarily laying off employees for up to three months if the shutdowns become necessary, according to Latvanen. “The negotiations will be held in positive spirit. The entire staff is equally appalled by the situation.”

Helsingin Sanomat on Friday also highlighted that the possible movement restrictions have also stirred up tangible uncertainty among business owners. The restrictions would effectively prohibit people from, for example, eating in restaurants and using the services of beauty salons and hairdressers.

“It does sound catastrophic,” commented Nina Sänkä, the owner of a hairdressers on Korkeavuorenkatu in Helsinki. “We won’t be ordered to shut down, but customers can’t come in. That means we won’t have any cash flow, which is the basis of our operations.”