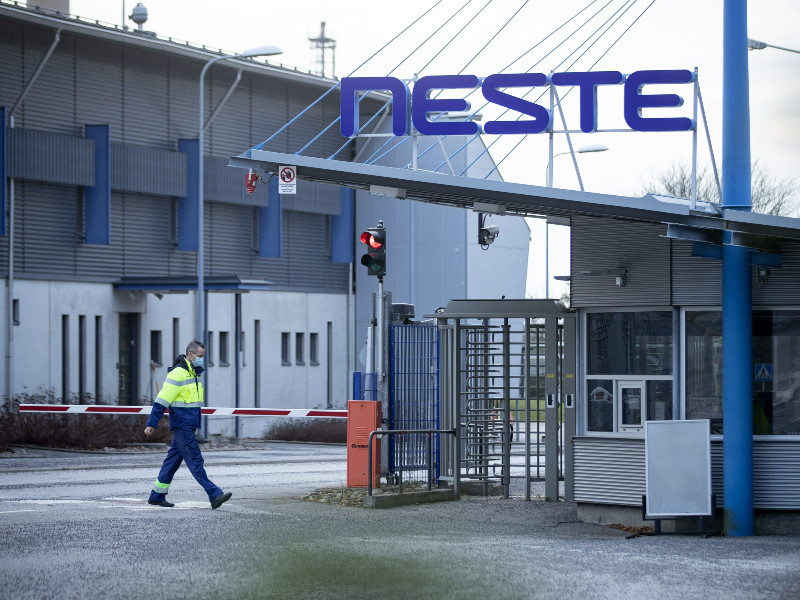 An employee at the main gate of Neste’s refinery in Naantali, South-west Finland, on Monday, 30 November 2020. (Roni Lehti – Lehtikuva)

NESTE on Monday announced it has concluded consultative negotiations with its staff and decided to move forward with a plan to shut down its oil refinery in Naantali, South-west Finland, by the end of March 2021.

The shut-down, coupled with other re-structuring measures, will result in the termination of around 370 positions and create annual cost savings of approximately 50 million euros.

The Finnish oil refining company said it will primarily offer its staff new jobs, related training and re-location support as needed. Staff whose employment contracts are terminated will be offered retirement arrangements and targeted support packages that include start-up grants designed to support education or entrepreneurship.

Jouni Mutanen, the municipal manager of Naantali, said the shut-down is a difficult outcome for the roughly 20,000-resident town and especially for the employees and their families.

“Neste must implement its protection measures in the event of restructuring in full,” he underlined in a press release. “Although we are losing a high number of jobs, I am very confident that the Naantali and Turku region will find success also in future and has a possibility to create a significant number of new jobs.”

The statutory process was initially expected to result in the terminations or outsourcings of up to 470 jobs.

Neste said the Naantali facility will focus on terminal and harbour operations. Means to support economic activity in the area in the future are being discussed in collaboration with regional environmental agencies, the City of Naantali and Ministry of Employment and the Economy.

Its Porvoo refinery, meanwhile, will be developed toward co-processing renewable and circular raw materials.

Trade unions have already expressed their dismay with the refinery shut-down. The Industrial Union on Monday stated that the seemingly well handled consultative negotiations wasted an opportunity to develop the company’s operations in collaboration with staff.

“Once again the negotiations left an impression that they were launched to achieve a pre-determined end result. One would imagine that a company that has previously adhered to a different negotiating culture and that is partly owned by the state could have done better,” slammed Riku Aalto, the chairperson of the Industrial Union.