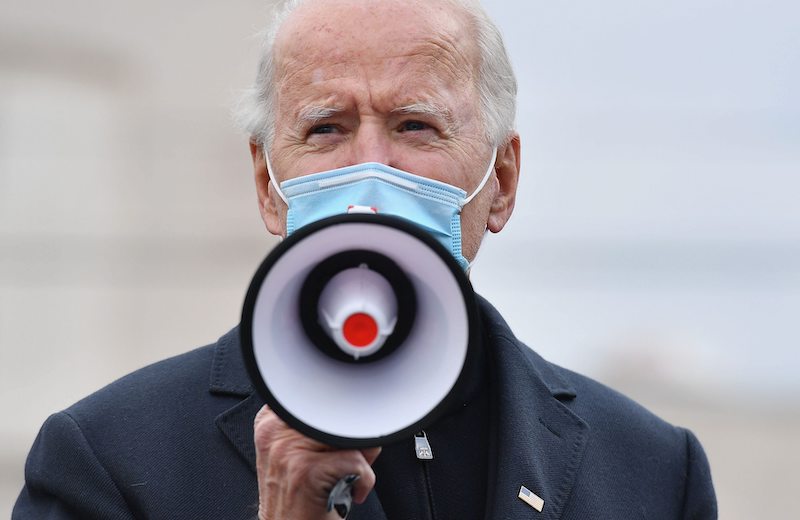 Democratic presidential candidate Joe Biden speaks at Canvas Kick Off at the carpenters Union in Scranton, Pennsylvania on November 3, 2020. - The US started voting Tuesday in an election amounting to a referendum on Donald Trump's uniquely brash and bruising presidency, which Democratic opponent and frontrunner Biden urged Americans to end to restore "our democracy." LEHTIKUVA / AFP

OP surveyed the expectations of the executives of large companies operating in Finland concerning the upcoming US presidential election. The majority of the respondents believed that Biden will win. A significant proportion of the respondents felt that the election result will have no major effect on their businesses.

According to OP’s survey, as much as 78% of the senior executives of large companies operating in Finland believe that the Democratic candidate Joe Biden will win the US presidential election. Around a fifth (22%) of the respondents believe that Donald Trump, the sitting president and the Republican candidate, will win.

“It seems that large companies’ representatives are very confident about Biden’s chances of winning. This view strongly reflects poll results and betting odds. According to opinion polls, Biden is clearly ahead throughout the country, including the swing states,” said Katja Keitaanniemi, Chief Executive Officer of OP Corporate Bank.

“The effects of the US presidential election result on the Finnish economy will be moderate. However, matters such as the future president’s trade policy will be noteworthy from the viewpoint of companies,” Keitaanniemi said.

The impact of the election result and the future president’s policy is expected to vary depending on the sector.

“According to our estimate, Trump’s victory would have a positive effect on consumables and the US financial sector, whereas Biden’s victory would support sectors such as construction, healthcare and renewable energy, as well as the global economy through trade relations,” summed up Antti Saari, Chief Analyst at OP.

Based on OP’s survey, 44% of large company executives found that Biden’s victory would provide them with business opportunities, with 7% thinking so as regards Trump’s re-election. A significant proportion of the respondents found that the election result will have no essential impact on business: 40% of large company executives found Biden’s victory neither a clear threat nor an opportunity. The corresponding figure for Trump was slightly over 30%.

“Historically, the stock market has taken the victory of a Democratic candidate with certain reservations in the short term. In the long term, however, the performance of stock prices has been more favourable during a Democratic presidency. Meanwhile, the victory of a Republican candidate has typically supported markets in the short term, but often this impact has faded quickly,” Saari explained.