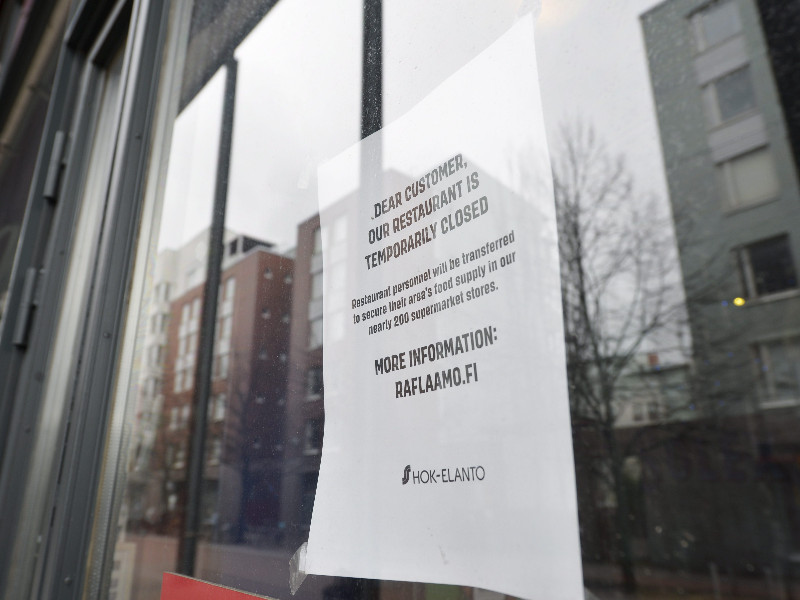 A temporarily closed restaurant in Ruoholahti, Helsinki, on 4 May 2020. The Finnish government is expected to relax its restrictions on the restaurant industry on 1 June. (Olivia Ranta – Lehtikuva)

THE FINNISH Hospitality Association (Mara) has declared that the newly announced 123-million-euro package to support the restaurant industry and its workers is insufficient.

Mara on Wednesday demanded that the government almost triple the package to 350 million euros, highlighting that restaurants are among the businesses worst hit by the coronavirus pandemic and the measures adopted to contain it.

“The justification for the low amount [of financial support] has been that also other industries have suffered,” said Timo Lappi, the managing director at Mara. “The main victims of the economic catastrophe caused by the coronavirus have been restaurants, hotels, spas, conference centres and many other travel industry companies, most of which also have restaurant operations.”

“The loss of sales in other large industries with a high number of employees is nowhere near the losses in these sectors,” he added.

Service Union United (PAM) said it is hopeful that the package will suffice to prevent companies from making widespread staff cuts and going bankrupt. Annika Rönni-Sällinen, the chairperson at PAM, pointed out that the weeks-long wait for financial support has yet to cause bankruptcies in the industry.

“The government must nonetheless prepare for the possibility that the support will not necessarily be enough if the number of applicants and costs increase more than expected. The industry would then need more support,” she added.

The restaurant and accommodation industry provides employment to roughly 90,000 people in Finland. PAM has revealed that, based on its latest sectoral barometer, up to two-thirds of the employees have been temporarily laid off due to the outbreak.

Minister of Employment Tuula Haatainen on Wednesday revealed around 83 million euros of the support package will be used to compensate for up to 15 per cent of the losses incurred by companies due to the coronavirus epidemic. The funding will only be available to companies that have paid their taxes and will be capped at 500,000 euros per company.

Haatainen added that the compensation funding is intended to cover the inflexible expenses of companies, meaning it is not intended for wage or investment costs.

The rest of the support package will be used to promote employment in the restaurant industry. Companies will be able to apply for funding of 1,000 per employee for no more than 800 employees. The amount of funding may also depend on the other forms of financial support received by the company.

“This approach enables us to support not only companies, but also the return to work of as many people as possible who have been temporarily laid off due to the coronavirus epidemic,” said Haatainen.