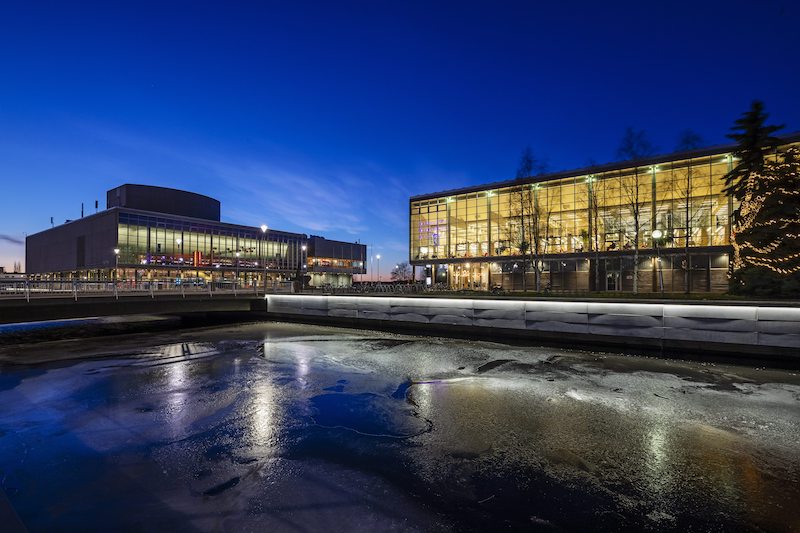 While Finland and the rest of the world are preparing for 5G with all the excitement and scepticism characteristic of new technology, somewhere up in the northern city of Oulu in Finland, researchers are already testing the first blocks of 6G or sixth-generation wireless technology. Oulu has been a frontrunner of wireless technology in Finland for many years, partly due to the topic being taught and researched in the University of Oulu and a cluster of high tech companies forming around the university and its graduates.

Here are 3 of these businesses with a global clientele.

You probably have never heard of Bittium, and that is how the company wants it to stay. Bittium's products are just not for everyone. Take Bittium's "Tough Mobile" cellphone for example. It looks just like any other smartphone at first glance, but don't be fooled; this is a confidential level secure phone made for professionals only. The phone which has military-grade durability is built from scratch in Finland, and the Android operating system is stripped of all vulnerabilities. As with other Bittium's products, the exact place of manufacturing is kept secret. We only know that all of the company's products are made in Finland.

"Tough Mobile 2" has "restricted" security level with a unique hardware-based privacy mode. These phones are used by intelligence services, diplomats, high-level executives and militaries. Surprisingly the phone does not cost more than a higher-end iPhone or Samsung, and you can buy it from the company's online shop.

"These phones have a button that when you push it, the microphone, camera and Bluetooth are physically disconnected," says Hannu Huttunen CEO of Bittium. "So, even if there would be malware on the phone, it can not access the camera and microphone."

So you are saying that my iPhone is not secure? "No" Huttunen responds immediately. "it can be listened to anytime." But the main problem is not state actors or intelligence services hacking into your phone and eves-dropping on you. "In many countries, rules and regulations are not that strict, so the government can get access through commercial operators to listen to anyone or read their data," Says Huttunen. "that is why we are offering the end-to-end encryption, so the communication opens only on the other end. For this to work, of course, you need to have two Bittium phones on both ends or at least run our software."

Who is the highest-ranking person using your phones? Huttunen laughs. "I am not sure if I can reveal that, but many presidents use our phones." It's not long ago that the news of Angela Merkel's phone being under surveillance by the NSA broke out. So it wouldn't be a surprise if she switched to Bittium's Tough Mobile after that.

Before you get too excited, you should know that Bittium's highest security end-to-end encryptions are not available to everyone. The company has to ask for approval from Finnish security police for sales on that level, and some countries are excluded from potential customers.

Bittium's online shop has only one other product category, which is Bittium's medical devices. What these two categories have in common is that they are both mere side products of the company's primary technology, which you can not buy on any online shop.

Bittium started with building Tactical communication devices for the defence industry, including Wireless IP Networks for Finnish Defence Forces for nationwide Command and Control (c2) usage. Defence communication is still the main business of the company. The consumer secure phones and medical devices were a natural area for the company to expand to, using its encryption and signal processing expertise. Bittium's medical devices include biosignal detection devices for heart, such as long term ECG monitoring, and brain, i.e. EEG recording.

Another area the company comfortably expanded to was the satellite phone market, which was jumpstarted when Mexsat ordered hundreds of satellite phones for use by the police and army forces of the government of Mexico.

Bittium has about 700 employees with offices in UK, Germany, US, Mexico and Singapore in addition to the Oulu headquarters. Net sales in 2018 were €62.8 million, and operating profit was €2.8 million. The company invests a staggering 34.4% of the net sales, i.e. over €21 mil. Back into its 400+ R&D projects ranging from different handsets to radio elements for different mobile network generations. Bittium is also a world-leading 5G service and technology provider. Bittium is listed on Nasdaq Helsinki.

Jari Still was building solutions for mobile devices some 30 years ago. He was way ahead of the market, and of course, the business was not huge. He sold his company, Modera Point to F-Secure in the year 2000 and all employees were transferred to F-Secure to form its mobile security solutions unit which remained in Oulu, where Modera Point started. That's when things started happening. "And then Nokia started growing, and at some phase they had over 40% market share and millions of phones delivered. You can imagine that every phone that Nokia shipped had our application in it," says Still.

The industry was prepared and expecting viruses to infect mobiles devices back then, but not much happened. "It seems that it's getting worse only now, unfortunately, from the user's point of view," says Still. "So the Android platform, obviously being open and you can download applications everywhere, is a problem area. Another problem area of iPhones for example is the privacy and identity issues. No matter what operating system you're running, there are problems."

But most of all Still is worried about the tsunami of IoT devices entering the market; many of them not up to the standards when it comes to cybersecurity. "Now every freezer and toaster has software, which is built by people with hardware mentality," Still comments the IoT devices. "They think hardware and just add a Sofware component, and they don't understand how to do it securely. So it's an increasingly common problem that your home or office network is hacked through your lamp or your robot vacuum cleaner."

Really? Can you be hacked through your connected lamp? "Yes!" Still answers without hesitation. "We have done it many times." The company often performs "White Hat" hacking tasks for its clients to probe the security of their networks.

Above all, Still emphasis that any system or network can be hacked. The key point is only the persistence of hackers. So a sustained attack will bring some level of result in the long run.

"We have never failed in hacking assignments. There are always vulnerabilities, because it is software, and software always has bugs," Says Still. "At least some years ago, the average was one bug in seven lines of software."

That is why the company offers new measures and invents new tricks constantly. Some of these include Data Recovery Service, where you can get your system back online quickly in case of crashes or ransomware attacks and the new Data Discovery Portal were you can check what information you have given to popular online service providers such as Facebook, Twitter, and Apple.

The company also deploys so-called "Honeypots", i.e. fake servers impersonating servers of clients or companies which hackers seek to attack. Examples of sensitive companies are, of course, those with valuable information or where transactions occur. This is why banks and online casinos pay special attention to their security. One example is LeoVegas which spends considerable amounts on making the site secure.

F-Secure has around 70 "fellows" (the company calls its employees fellow) in Oulu, but altogether the company has now over 1600 employees in its 30 offices around the globe. Its revenue was €190 million in 2018 from over 100 000 corporate customers and tens of millions of consumers.

Tosibox is the brainchild of Veikko Ylimartimo. Working in the networks and connectivity industry, Veikko often wondered why it was so difficult to build these networks and why did the users need to know so much IT stuff just to have secure access to devices. "If a tourist can fly across the oceans without knowing anything about aeroplanes, why can't people enjoy the benefits of technology without having to have an IT degree," Ylimartimo often said.

He came up with the idea of packing all the complicated software needed for a secure point to point connection into simple hardware: a lock and a key. You can take the key, basically a USB stick anywhere in the world and connect it to your computer. The "Key" automatically finds the "Lock", which is back in your home or office and connects to it securely in 10 seconds. You can then access any device behind the lock, be it a camera, robot or machinery.

It was only nine years ago back in 2011 when Veikko established the company, and the development has been fast since then. Having developed and patented the world's first remote access device with Plug & Go™ technology, Tosibox sold its first device out of its Oulu Finland headquarters already in 2012. Today the company has 89 global patents for its technology in 24 countries, Tosibox has 55 employees and subsidiaries in the US, Germany and Scandinavia.

CEO of the company today is Prof. Jarmo Limnell, who himself is still active in Aalto University in Espoo. The company considers itself a game-changer in building secure point to point networks.