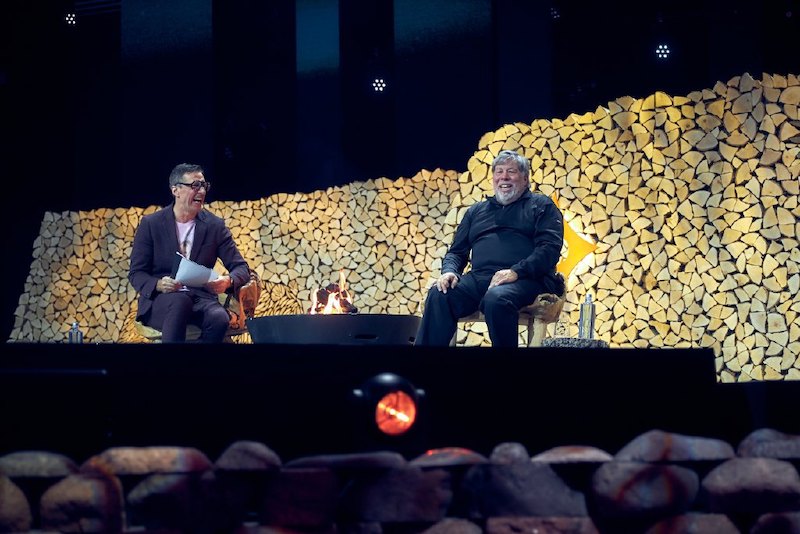 The 10th Nordic Business Forum was held on 9 - 10 October in Helsinki. This year the magnet of the two-day event was Hollywood actor and activist George Clooney while Last year's main speaker was the former president of the United States, Barack Obama.

Inviting at least one prominent speaker has been a so-far successful marketing strategy for NBF. Next year's speakers are usually announced at the end of each forum, right before the main speaker when the hall is full. The audience then gets a considerable discount if they reserve their tickets in the next few hours.

The often sold-out event has become one of the most anticipated business events in the Nordics, which brings together world-class business mentors and speakers and an audience of business leaders from the Nordic countries and beyond. 7500 people from 60 different countries attended this year's forum. The presentations were also viewed by 20 000 people who had purchased a live stream ticket. Other speakers included Brené Brown and Steve Wozniak.

While some speeches are purely inspirational, such as that of Clooney or Wozniak in this year's forum, others are meant to be informative and attempt at coaching the business-oriented audience. The presentation titled "Lessons from the Science of Timing" by the best selling author Daniel Pink was an excellent example of the second group. Using statistics and citing results of scientific research, Pink sought to convince the audience that people's performances can quality-wise vary significantly during the day. "If you take one lesson away from this speech, I hope it will be that you never visit a hospital in the afternoon," said Pink. Doctors and nurses statically make more mistakes in the afternoon.

Two other speakers who used facts and figures to coach the audience towards better business decisions where Costas Markides and Alex Osterwalder, both focusing on the issue of innovation in business.

For the second year, some of the speeches or components of them looked a bit like product placement or paid content. One example was the speech by Juliet Funt about "White Space at Work". Funt, who is the founder of a company bearing the same name (Whitespace at Work!), basically advertised her company and some of their clients in his 45-minute speech. It is unclear if she was paid for the slot or if she paid the organisers for it.

Also, certain products seemed to pop up repeatedly during different speeches. One example was Nescafe, which also Clooney happens to be a spokesperson of. If product placement and paid content is really part of the organisers' strategy to increase the revenue, it will turn out to be a big mistake as the well educated paying audience, mainly consisting of business leaders and managers can see through that and would feel betrayed.

Another weakness of the program has been the inability to extract better output from top speakers. While paying large sums of money to people like Wozniak, Obama or Clooney, the organisers have often had them interviewed by unprepared, uncharismatic and non-professional interviewers. This trend has diminished the value of high profile speakers in the past few events, including this years forum.

Barak Obama, who never visited Finland during his two terms of presidency of the united states, arrived in Helsinki to "speak" at the Nordic Business Forum in September 2018. Instead of speaking, he was interviewed, which has been the case with many of the big names appearing at the forum. Trusted with the job of interviewing Obama, was Niklas Zenneström, the CEO of Atomico and billionaire investor who had himself been interviewed by someone else in the conference earlier the same day. The uncharismatic, zombie-like Zenneström started with basketball "which we both love" and continued the boring one-hour chat without asking any meaningful or serious questions from Obama. This was at the time when Obama had already started criticising Donald Trump, and there were many critical international issues and lots of newsworthy topics to tackle. The result was a catastrophic waste of an excellent opportunity for the audience to hear something new and for the Forum to get noticed globally, in case Obama had revealed something newsworthy.

It's unclear if these mishaps are the result of the organisers trying to reduce costs, or a lack of judgment. Cost control could not be the main reason, as NBF Ltd. has been financially well off, with increasing revenue, rising to over 8 million euros in 2018. The company made a profit of over half a million euros that year.

The forum, which was established by two students in Jyäskylä expanded to Stockholm and Oslo a couple of years ago, after growing to its limits in Helsinki.

One thing the organisers have done a great job at has been creating an inspiring event with great networking possibilities. The Brella App, together with a designated meeting area and tables, makes arranging meetings convenient.

The atmosphere is pleasant, with food and drinks during the breaks. A speakers contest was initiated last year with the winner being the opportuity to speak to the high-level audience for a €20 000 reward, which has been raised to €50 000 for next year. Winner of 2019 was Anssi Rantanen, who showed the audience how to create a brand, website and chatbot in 5 minutes. Although the speech and presentation were well prepared, the content was, in reality, a mere mock-up of no real value.

The next Nordic Business Forum will be held in Helsinki on September 23rd and 24th, 2020.

The theme of 2020 will be Rethinking Business. "The purpose of this theme is to get business leaders to challenge themselves and think about how they can better lead a business in today's changing world, as well as how the challenges we are facing today demand new ways of thinking," organisers have announced.

In addition to Harari, Schwarzenegger and Godin, next year the audience will have a chance to listen to other top speakers. The list includes entrepreneur & computer scientist Rana el Kaliouby; CEO of futurethink, author of kill the company & why simple wins Lisa Bodell; professor of management at the Columbia Business School Rita McGrath; Professor at INSEAD, author of Culture Map Erin Meyer; CEO & co-founder of HubSpot Brian Halligan; and Chairman of Sampo Group & UPM Kymmene Björn Wahlroos. Wahlroos has been in the news in recent days for a new book and his warnings about the grim future of the Finnish economy.

"Many of the speakers that are coming next year are people that our customers have wished for," says Aslak de Silva, CEO of Nordic Business Forum. Yuval Harari has been the most requested speaker according to the feedback from the attendees of the conference. For Schwarzenegger, it will be his second appearance in the forum. His speech in 2014 was a "big hit" according to organisers.