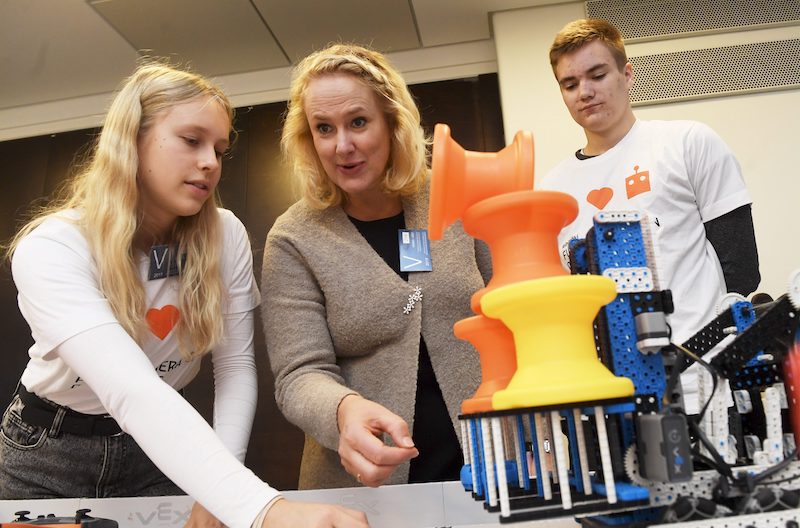 Matilda Ahola (left) and Eemil Lähteenmäki (right) demonstrate robotics to Heljä Misuka, The education director of the Trade Union of Education in Finland, OAJ, in a pop-up school in Helsiniki on 4th Oct. 2019. Education was one of the topics with Haigh satisfaction in Finland.

Trust and social cohesion bounces back to pre-crisis levels across the EU, with people in Finland and Denmark having the highest trust in national institutions.

Contrary to a generalised concern about a ‘crisis of trust’ in the aftermath of the financial crisis, trust in national and EU institutions has bounced back to pre-crisis levels, while civic engagement has increased, and perceived social exclusion has decreased.

Eurofound’s new flagship report ‘Challenges and prospects in the EU: Quality of life and public services’ reveals that during the financial crisis trust levels fell considerably in terms of perceptions of both national governments and EU institutions, with the countries hit hardest economically reporting the lowest levels of trust.

Trust is an important indicator of the well-being of citizens and the overall cohesion of society, and the perception of the quality of public services is a particularly strong determinant of trust, acting as the dominant medium through which individuals experience how the state functions.

The report identifies the factors that influence an individual’s perception of trust, which includes their economic situation, the perceived quality of public services, societal tensions, levels of tertiary education and the political integrity of the government. Furthermore, it highlights that people with lower levels of perceived security in terms of housing, employment or old-age income have considerably lower trust in institutions compared to those with higher levels of economic security.

Following the economic recovery, the number of people at risk of poverty or social exclusion in the EU fell to 113 million people in 2017 – below the pre-crisis level. Moreover, this decrease in social exclusion has likely strengthened trust in national and EU institutions. However, it must also be noted that disparities remain between Member States, and in some countries trust levels are lower and social exclusion higher than the corresponding 2008 levels.

The report finds that the lowest levels of trust in national institutions can be observed in Croatia Bulgaria, Greece, Slovenia and Slovenia, while levels are highest in Finland, Denmark, Luxembourg, Sweden and the Netherlands. When looking at trust in the EU, in 2016 the highest levels of trust were reported in Lithuania, Romania, Malta, Luxembourg and Finland, and the lowest levels in Greece, France, Cyprus, Czechia and Italy.

In contrast to the otherwise positive recovery of social cohesion and trust, perceptions of tensions between ethnic and religious groups were more common in 2016 than before the crisis, resulting in a negative impact on trust in institutions. The report notes that addressing these tensions may require work on social and economic integration and group relations.

As the overall economic situation has improved across the EU and the level of social exclusion has fallen, levels of trust and social cohesion have climbed back to pre-crisis levels in most countries. The report identifies that improving the delivery of quality public services and engaging the public in the co-design of services is fundamental to increasing trust and social cohesion across the EU.