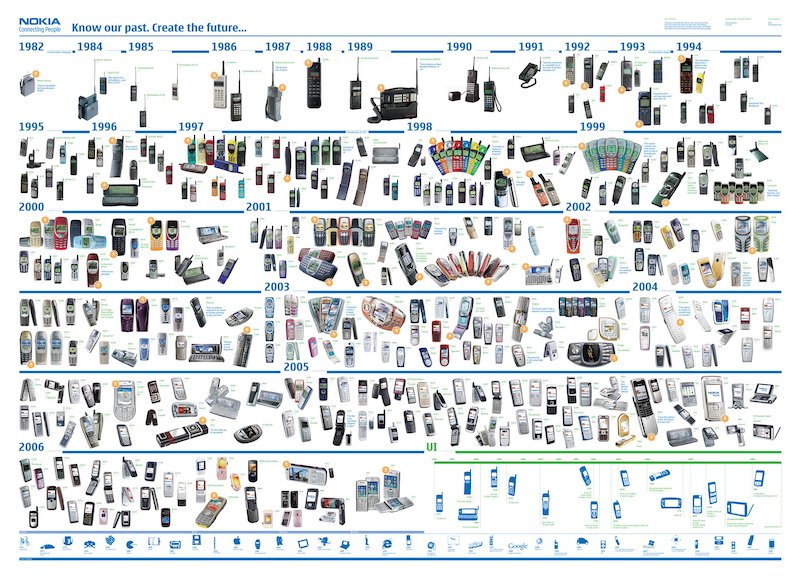 a visual history of Nokia phones

There was a time where Nokia phones were the dominant force in the world of mobile communication. Today, however, these devices make up only a small fraction of the total numbers sold. Still standing as one of the biggest influences on mobile tech, we want to take a brief look at what made Nokia great, and what led to their eventual decline.

Founded in 1865 in Tampere, Nokia has seen substantial shifts in its output over the years. Originally operating a pulp mill, the now technologically-focussed business then moved into electrical generation, and then rubber production.

Their more focussed and production-heavy inventions started with respirators in the 1930s, which were still developed into the 1990s. It was their development of radios, however, which would go on to have the most pronounced influence on their early direction.

Having gained a foothold in tech, Nokia then went on to develop computers, and then mobile phones. It was following their acquisition of mobile telephone company Mobira in 1981 that this development started in earnest. Their first effort was a mobile car phone in 1982, followed by a fully portable phone range called the Mobira Cityman in 1987.

While other aspects of the company still performed well, it was mobile phones which quickly became the primary focus. As this market grew in the late '90s, Nokia was primed to take advantage.

When mobiles became cheap and reliable, the mass market needed a device that could best fit everyone's needs. For many users, this device would be the Nokia 3310, also affectionately known as the ‘brick'.

Famed for their reliability and indestructibility, these were the first mobiles which many users owned. This would generate considerable attention and goodwill, leading to Nokia dominating through the early 2000s.

At their highest point in the fourth quarter of 2007, Nokia enjoyed a 50.9% share of the total smartphone market. This, however, would soon decline.

As smartphones became ubiquitous, interlopers made their way into Nokia’s space. Developers such as Apple and Samsung had learned from Nokia’s success, and put their own twist on these devices to move them ahead.

A significant part of this came from the adoption of better operating systems. Android and iOS were far more flexible than Nokia's Symbian OS, making them a better fit for the age of mobile internet.

New mobile games like Tomb Rider Legend and online gaming websites played a huge part in this, offering users experiences which digitalised the benefits of desktop or classic access. Many of these sites required new kind of mobile devices and operating systems. The same can be said for streaming services, which have seen similar continuous growth over the last decade.

When Nokia refused to evolve they lost their lead, and this downward trend would continue for years.

Facing bankruptcy, Nokia did eventually relent and adopt better operating systems for their phones but, by this point, the market had left them behind. They still produce pieces of hardware, but their former fame in the mobile phone sphere appears to be firmly a thing of the past. Nokia has since focused on networks and other products, including the upcoming 5G wireless networks. Nokia also owns hundreds of patents which are bringing a constant stream of revenue to the company. New Nokia phones are being produced under licence by HDM Global since May 2016 and made by Foxconn.

What is undeniable, is Nokia’s legacy and the influence which they've had on shaping our current world. Mobiles are essential today, and no short part of this is owed to the hard work which the company has put in over the years. Nokia isn’t just one of the more important businesses which have existed in Finland, it is one of the most important businesses the world has ever seen. Whatever the future holds for them, this can never be taken away.