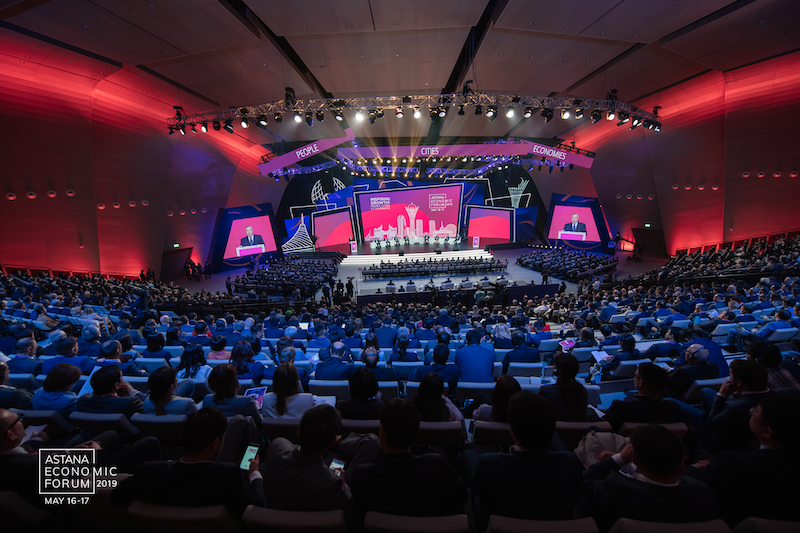 Astana Economic Forum has been a high level international event since its conception in 2008, with over 50 000 delegates from 150 countries including more than 20 Nobel laureates and numerous world class intellectuals and influencers in economy and politics speaking and attending each year.

The forum has also provided an international meeting point and deal-making opportunity for public and private sector businesses, with 300 memorandums and agreements being signed last year amounting to deals worth over $20 billion.

The Forum has also influenced international politics directly. Specific AEF recommendations have been taken into account in decision making at the G8, G20, UNESCO and other platforms and in 2012 to the UN General Assembly with high regards.

This year a total of 5492 delegates from 74 countries participated and over 710 media representatives from 30 different countries followed and reported on the event.

A main speaker in this year’s forum was Christine Lagarde, Managing Director of the IMF who was the keynote speaker for a round table of finance ministers and governors of central banks of the countries of Caucasus and Central Asia, Eurasian Union countries and Mongolia on the topic of “economic policy measures for inclusive growth”.

Among other speakers were Paul Romer, Nobel prize winner for Economy in 2018 and Chief Economist at the World Bank (2016 -18); Stanly Fisher, Vice president of the US Federal Reserve (2014-17): Ms. Armida Alisjahbana, Executive Secretary of the United Nations Economic and Social Commission for Asia and the Pacific and Risto Siilasmaa, Chairman of the Board of Directors of Nokia and founder of F-secure.

Open discussion: The world without multilateralism?

One of the most interesting topics was a discussion on Multilateralism or the demise of it. In this session a high level panel of international influencers discussed the risks associated with the collapse of the global cooperation system, the impact of decentralisation of power through technology and the challenges of striking balance between security, sovereignty, technology, society, equality and prosperity. The panel consisted of Armen Sarkissian, The President of the Republic of Armenia; Alikhan Smailov, First Deputy Prime Minister of the Republic of Kazakhstan, Minister of Finance of the Republic of Kazakhstan; Stanley Fischer, Vice Chairman of the US Federal Reserve Board of Governors (2014-2017), Governor of the Bank of Israel (2005-2013); Carlo Monticelli, Vice Governor, Council of Europe Development Bank; Vladimir Yakunin, Chairman of the Supervisory Board of the Dialogue of Civilizations Research

Peter Frankpan opened the session with a brief introduction of challenges in the world today including the crises in Venezuela, Iran and the Middle east, Brexit, climate Change, water supply and how the crumbling of “rules based order” weakens our abilities to tackle these challenges.

Pres. Armen Sarkisian did not totally agree with the severity of the situation and presented an optimistic view of the future, claiming that the few bleak developments are just temporary and when looking at a longer period of time, humanity is progressing to the right direction. “ in the past change happened through revolutions, such as the Industrial Revolution, and then there was a period of slow progress, but now we have entered a phase transition era, of REvelotuion, i.e. Rapid Evolution where things change constantly,” he commented.

Stanly Fisher disagreed with President Sarkissian. “ We had a fairly robust framework for the global economy for about 60 years” said Fisher and then briefly mentioned historical global economic crises, “This one (crisis) is enormously complicated by the fact that the United States which was the hegemon in the previous system is not interested in the system anymore. We have president that by and large doesn’t like most of the things like in the Bretton Woods which were the basis of the success of frameworks.”

Carlo Monticelli start with differentiating between “multilateralism” from “multilateralism under the Pacs Americana”. “The beginning of the resolution of Pacs Americana is moving towards a new system and we are in the transition phase,” He said. “In the new system USA will not have the role of the Hegemon.” “But we can have new multilateralism under multipolarity with no need for a hegemon, and hopefully not a bipolar, US - China system which would be very dangerous both economically and militarily”

“International organisations were created after the world wars in order to prevent new global crisis and those institutions must be respected, otherwise we will not be able to tackle global issues such as climate change and economy by regional forces” commented Riaz Khokhar.

“Multilateralism implies that civilisations consider each other as equal partners,” said Vladimir Yakunin. “There can not be equal discussion between a hegemon and a subordinate”

Other notable sessions of the forum tackled issues such as participation of women and youth in saving the world, food security, big data and artificial intelligence, health care, information economy and digital currencies, and the future of car manufacturing.

*Previously called Astana, the capital city’s name was changed to Nur-Sultan late March this year to honor the long term president of Kazakhstan Nur-Sultan Nazarbayev and his role in developing the city to it’s modern form.