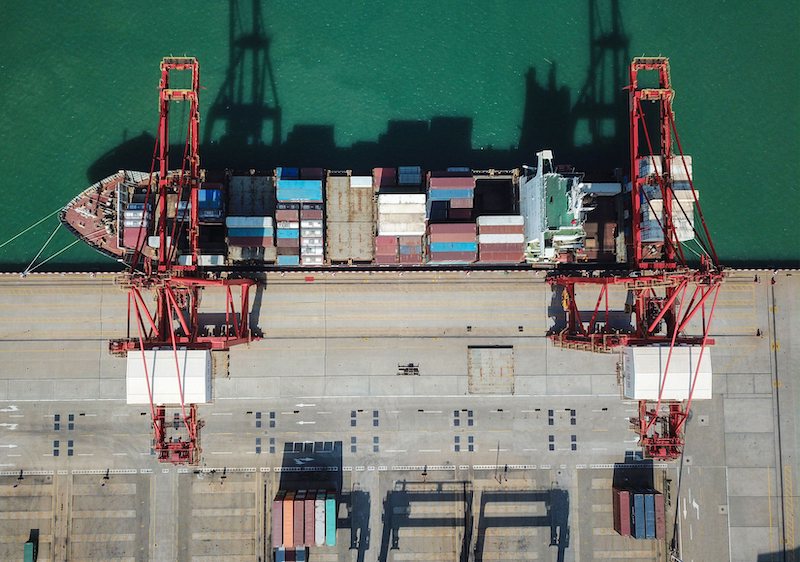 This aerial photo taken on May 8, 2019 shows a cargo ship berthing at a port in Lianyungang in China's eastern Jiangsu province. - China's exports fell more than expected in April while imports rose, official data showed on May 8, ahead of high-stakes talks aimed at resolving a trade war with the United States. (Photo by STR / AFP) / - LEHTIKUVA / AFP

Munich, May 10, 2019 – International economic experts fear that the tariff war between the US, China, and Europe will lead to a decline in world trade. This is the result of the World Economic Survey conducted by the ifo Institute among 1,130 economists worldwide. When asked to name the most significant consequence of the higher tariffs, the predominant answer was “less trade.”

This answer scored 1.7 on a scale of 1 to 3, where 1 means “most important.” It scored 1.0 in the Middle East and North Africa, indicating that this concern is particularly pronounced among experts there. Respondents to the ifo World Economic Survey from the countries in the Commonwealth of Independent States (CIS) gave this answer an average score of 1.4. Experts from the EU, Latin America, and China followed with 1.6 each. In other developed economies, the figure was 1.7. By contrast, experts were comparatively relaxed in the emerging markets of Asia and Europe, where the answer scored 2.1, and especially in the United States, where it came in at 2.2.

But the economists also expect to see stronger protectionism, import tariffs pushing up costs, and adjustments to supply and value chains. All of these consequences achieved an average score of 2.0 on the survey questions. Meanwhile, the experts consider rising prices for goods and services and a redirection of trade flows (2.2 in each case) to be comparatively less likely.

In all regions of the world, with the exception of the Middle East and North Africa, more than 50 percent of respondents see their national economies being affected by the current trade disputes. More than 75 percent of the experts in the European Union, other advanced economies, and Latin America say this is the case; in Germany and the Netherlands, more than 90 percent of the experts say that the escalating trade disputes are affecting their country.