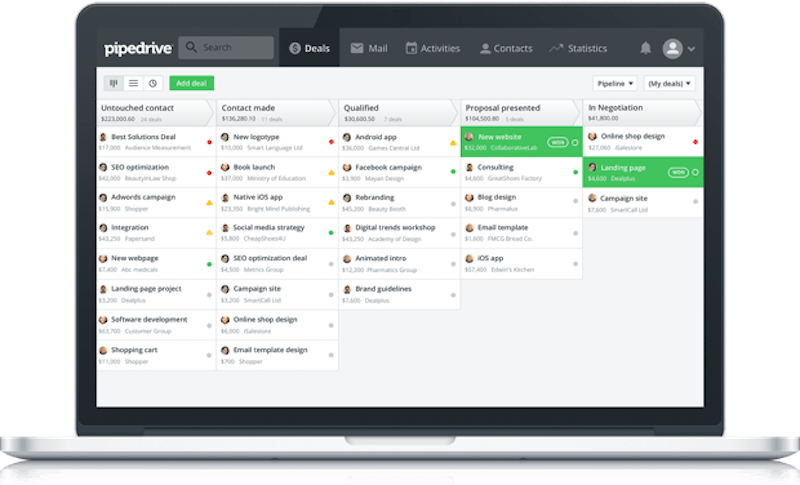 Pipedrive is a sales CRM, or Customer Relationship Management, tool that began as a tiny start-up in a garage in Estonia in 2010. Now, the company has expanded globally. It has $80 million in funding and has its headquarters in Tallinn and New York City, offices in London and Lisbon and over 75,000 customers in over 170 countries. Their success is seen not only through this global expansion but through its achievements as well. It won the 2017 Sales Tech Award, was named Best Employer in Estonia in 2016 and Best Enterprise SaaS B2B Startup by The Europas in 2015.

Pipedrive was founded by co-founders Martin Henk, Urmas Purde, Timo Rein, Ragnar Sass and Martin Tajur, to fill a gap in the CRM software market. Their focus is on helping salespeople do their jobs and putting their needs first. Two of its co-founders were both experienced salespeople who noticed this gap and wanted to do something about it. They wanted to create a tool that was easy to use by salespeople, one that would streamline their work and allow them to focus more on sales.

In using Pipedrive, it is clear that it is truly a tool designed by salespeople for salespeople. It is a tool that simplifies and organises sales tasks, making it easier to focus on the selling itself. Because it is an activity-based tool, it keeps you on track of leads by scheduling follow up calls and emails, proposal deadlines and meetings. If you’re in the middle of one task, you can schedule another sales activity for a later time so that no activity is forgotten. It is also easy to keep notes for each deal and find them at a later date. This is particularly handy when taking over tasks for a colleague or predecessor.

The user-friendly visuals and interactive nature of Pipedrive also help simplify the working day by laying out all the tasks ahead. The visuals make it easy to see the deals at each stage of the pipeline. The tool is easily customisable so you can check your current deals according to different criteria. It is a real time saver when everything is so simple to use and access, leaving more time for more important tasks.

Their website also has great resources for sales staff. These include sections on sales tips, CRM education, sales management advice as well as templates for sales tracking and reports. They currently offer three different user plans Silver, Gold and Platinum all of which come with a free trial so you can test it out before you commit.

More information can be found at www.pipedrive.com.