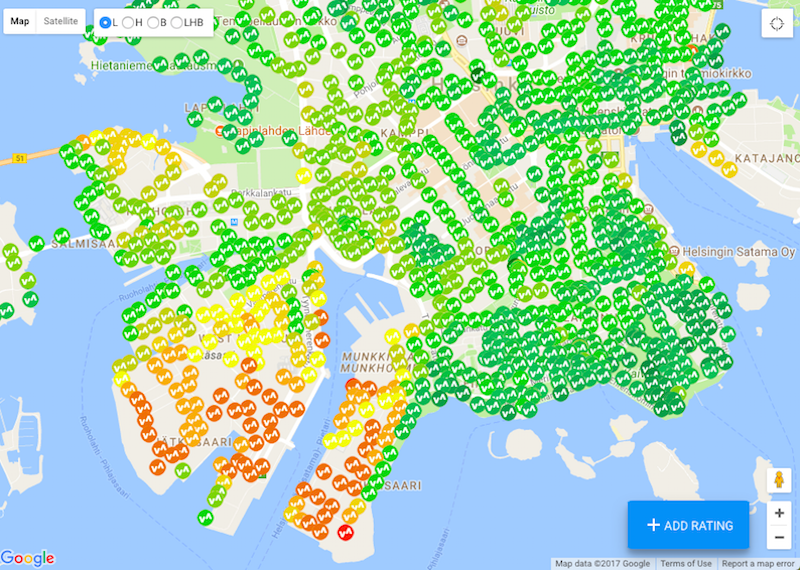 The environmental surroundings of central Helsinki as rated by EnviRate users.

It is fairly bizarre to think that until recently, you could rate everything from apartments to ex-girlfriends online, yet no platform existed for rating the environment around you. If we are so keen on rating everything from viewpoints to hotels in faraway destinations, then why do we not yet rate that which we experience every time we step outside our front door? Why do we not rate the air we breath on a daily basis – the most fundamental of our human needs?

These were questions Environmentalist Pekka Harju-Autti asked himself upon finishing his doctoral thesis on the differences in environmental awareness around the world. And, so, the idea for a new environmental, web-based solution revolving around user-ratings was born.

The idea has now developed into an online application called EnviRate, which allows users to evaluate the state of the environment around them. From a scale of one to ten, you can rate the air you breath, what your surroundings look like, and the level of noise in your current location. These ratings, in turn, show up on one of three maps available to all registered users.

The challenge for EnviRate, as for any user-based rating system, is that it doesn’t work without an active user-base. There is no app if there are no ratings, and the EnviRate team is more than well aware of this. Accordingly, one of the core team-members, Mika Vanhanen, has been tasked with the not so modest assignment of securing a dedicated user-base for the application.

Vanhanen, whom Harju-Autti likes to call the man of one hundred million trees, runs a virtual school of 100,000 people in 160 countries around the world. This year, the network reached a goal, set fifteen years ago, of planting 100 million trees in total by 2017. Thus, Vanhanen is now keen to take the group’s activities to a new level by incorporating the task of rating the environment around them.

EnviRate also relies on various incentives to attract users from outside the pre-existing network. For example, the team has now launched a three-month long ‘city rating’ campaign. Each month, three users have the chance to win a Nokia 6 smartphone simply by rating the environment around them. Currently, ten Finnish cities are included in the competition, but if successful, the campaign will be extended to all cities in the world with more than 100,000 inhabitants in the autumn.

In a few weeks, a new feature will also be added to EnviRate. With the so-called EnvirAct, users will be able to create their own, and attend other users’ environment-related events. Events can range from spending the day hiking in the forest to cleaning up streets of rubbish.

‘We are not saying that the events should be any environmental demonstrations or tree-hugging events. These have their own time and space. We simply want to spread the notion that environmental actions can be for anyone,’ Harju-Autti assures.

The EnviRate team, including Harju-Autti, do not currently make any profit from their start-up, and they are not expecting to do so in the near future either. Rather, EnviRate is about a genuine belief in ordinary people having the power to make a change in the environment.

‘For better or worse, our humble starting-point is that we really want to make a change, and be of service to our planet. That is why our slogan is “humanity making peace with mother-earth”,’ Harju-Autti concludes.

Currently, EnviRate is available as a web-based solution only. An Android application has been developed, but there are no plans for its release as of yet.