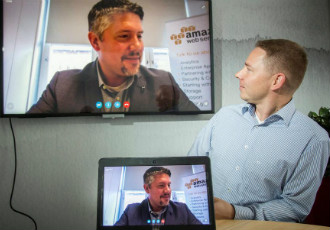 Amazon has recently set up an office in Finland – although not for the business segment it is known for among consumers across the world.

The American technology giant has not forayed into Finland to expand its online marketplace but to establish an office for the customers of its cloud computing business, Amazon Web Services (AWS), in Espoo.

AWS is both the most profitable and the fastest-growing business segment of Amazon. Jeff Bezos, the chief executive of Amazon, has gone as far as to predict that cloud computing services may in the future become a bigger business for the technology company than its online marketplace, Amazon.com.

Amazon is already by far the largest provider of cloud computing services in the world. Cloud is a term used to refer to the transfer of processing power from the computers of businesses and consumers to massive data centres accessible via the Internet.

The cloud has transformed processing power into a commodity not dissimilar to electricity. The customers of AWS, such as the Helsinki-based game studio Supercell, are able to utilise cloud services to bring their products to the fingertips of millions of consumers without having to splurge on data centres of their own.

Darren Mowry, the head of AWS Nordics, identifies speed as the single greatest change brought about by cloud-based services. The services allow technology start-ups to test their ideas in an agile way and to grow effortlessly if the idea proves feasible.

The cloud has already facilitated the creation of Airbnb, Uber as well as a plethora of other similar services while shaking up the entire technology industry. The main reason for the recent consolidation of one of the world's largest computer technology developers, Dell, and the world's largest provider of data storage systems, EMC, is widely believed to be their need to compete in the field of cloud services.

AWS opened its first office in the Nordics in Stockholm roughly a year ago. The Nordics may not be among the most populous markets in the world, but the region has spawned a number of successful technology firms, such as Sweden's Spotify, Estonia-rooted Skype and Supercell.

Mowry reveals that AWS has thousands of customers in the Nordics but declines to disclose the number of customers in Finland. The country is according to him an interesting market for Amazon because it is home to several rising start-ups and traditional companies that are interested in exploring the possibilities of the cloud.

Rasmus Roiha, the managing director of the Finnish Software Entrepreneurs' Association, believes Amazon's entry into Finland is a sign of recognition. “It makes me feel that something so important is going on here that they want to be a part of it,” he explains.

Cloud-based services have recently been the subject of unusual media attention: The European Court of Justice invalidated a ruling by the European Commission under which the data security offered by companies domiciled in the United States is sufficient from the perspective of European law – the so-called safe harbour ruling.

The decision is expected to have its ramifications for the transfers of data across the Atlantic. Mowry, however, insists that the decision will have no adverse impact on the operations of Amazon due to its ability to also store data on this side of the Atlantic.

“A customer in Helsinki can store their data in Frankfurt, and [the data] will stay there,” he says.

AWS is constantly expanding its data centres. Mowry reveals that the provider of cloud computing services is stepping up its processing power every day equivalent to the amount of power needed to run Amazon.com in 2007.

The expansion of Amazon has also stirred up hopes of other investments in Finland. Finland has, for example, adopted tax incentives in an attempt to attract large data centres to the country, but AWS is not, at least presently, planning on building its own centre in the country, according to Mowry.