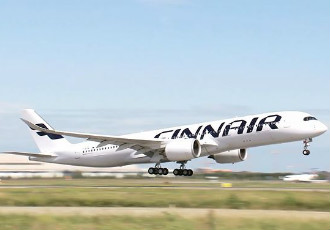 Finnair will unveil the first member of its new fleet of Airbus A350 aircraft at the Helsinki Airport on Wednesday and introduce a total of 11 A350s into service over the next two years.

The brand-new aircraft consume approximately 25–30 per cent less fuel than the Airbus A340s they will replace, thus providing the majority state-owned airline with a significant competitive advantage because fuel costs account for 25–40 per cent of its costs.

The A350s will also improve the passenger experience and may encourage many to choose Finnair as the carrier for their next flight. Many air passengers absolutely relish the opportunity to board a genuinely new aircraft type and give feedback on its seats, on-board broadband service, lighting and ventilation system.

Finnair will take delivery of the A350 as the first airline in Europe and only the third airline in the world after Qatar Airways and Vietnam Airlines.

It is widely understood that Finnair paid relatively little for the A350s as it was one of the first airlines in the world to place an order for them. In fact, it has already sold two of the aircraft to a leasing company and recorded a profit on sale of 70 million euros.

The modernised fleet will also enable Finnair to step up investments in its strategic core: its services to Asia.

Air travel is expected to grow especially in Asia. Finnair has sought to obtain a share of air travel between Asia and Europe already for a couple of decades.

Its marketing personnel illustrated the geographical advantage of Finland after the adoption of the strategy at the turn of the millennium to Asian airlines and travel agencies by drawing a map of the world on an orange. Finland was located at the northernmost point and Asia not too far south-east from there, just behind Russia.

A line drawn on the orange illustrated more clearly than a paper map that the shortest route from Asia to Europe was typically over Finland. If you split the orange in half by drawing a straight line from Asia to Central Europe, you could see that the journey was considerably longer.

Finnair also has the advantage of being able to make return journeys to destinations in Asia with a single aircraft within 24 hours.

The airline is competing primarily in the market of affordable stopovers by feeding air travellers from Helsinki to European cities without a direct connection to Asia. The airline has been able to compete in the market partly because of the smooth operations and traffic control of the Helsinki Airport.

While it has struggled to compete against direct services between major European cities and destinations in Asia, it has an advantage in services departing from slightly smaller cities in Northern and Central Europe.

The carrier has also benefited from the fact that fuel prices have fallen by nearly 50 per cent over the past 12 months. Its cost-saving programme has similarly progressed according to plan, despite some difficulties.

Moreover, the fact that the majority of its shares are in state ownership can prove beneficial in overhauling its fleet by alleviating the fears of creditors that it could be dragged into bankruptcy.

Then, the bad news.

Oil prices were widely expected to surge to 120 dollars per barrel as Finnair took the decision to modernise its long-haul fleet. The price of crude oil has instead dwindled from 90 dollars to around 45 dollars per barrel since late last year, thus reducing in half the competitive advantage of Finnair against airlines with an older fleet.

Nor is the strategy without its problems.

If Finnair is intent on encouraging air passengers to make a stopover in Helsinki, its services must be more affordable than direct services between Asia and Central Europe. The costs arising from the feeder traffic between Helsinki and Europe, however, are considerable even for Finnair.

The airline has refused to shed light on the profitability of its services to Asia and thereby not allowed investors to properly evaluate the costs arising from feeder traffic and the results of the strategy as a whole.

Its geographical advantage is partly real, partly a device of the marketing department. The geographical location of Helsinki is not too dissimilar to that of St. Petersburg, Stockholm, Tallinn, Riga or Vilnius.

Air passengers may also be intrigued by the possibility of making a stopover at one of the luxurious airports on the Persian Gulf instead of the Helsinki Airport – regardless of its impact on flight time.

Someone without a sense of humour could also criticise the use of an orange to demonstrate the length of the journey as the world is not really shaped like an orange, but rather like a ball.

The fact that the airline is in majority state ownership can similarly become a burden. It can lull the staff into a false sense of security, become an obstacle to development and encourage the management to over-invest as the costs will be ultimately covered by the state.

How should you weigh up the contrasting prospects of Finnair? Is its glass half-full or half-empty?

The answer depends solely on your point of view.

Calling attention to the downsides of various factors in order to create “a necessary crisis awareness” has been a feature of the economic debate in Finland already for several years. The investment made by Finnair represents a bold deviation from the approach – it implies confidence in the future.