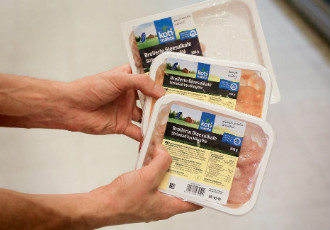 HK Scan has decided to build its new production facility specialising in poultry in Rauma.

The production facility is expected to provide employment to some 300 people. HK Scan will thus reduce its manpower by a maximum of 239 man-years but is not expected to have to resort to that many lay-offs as the reductions will be implemented by offering voluntary pension arrangements and by not renewing fixed-term employment contracts.

The meat producer has also reached an agreement with the City of Rauma on the transportation of employees between Eura and Rauma to allow its current employees to continue living in Eura.

HK Scan announced its intentions already a year ago but did not make a decision on the location of the new facility until now. Eura, Forssa and Säkylä were alongside Rauma the candidates to host the facility.

The employees have expressed their satisfaction with the fact that the facility will be built relatively close to the one it replaces. They have also suggested the manpower needs of the new facility have been under-estimated.

“It's our preliminary estimate that around 350 employees will be needed in Rauma. It's clear that there would've been no future in Eura. We can now grow in Rauma, which is where our future lies,” said Eira Ylitalo-Salo, the chief shop steward at the production facility in Eura.

She refused to speculate on the number of redundancies on Thursday.

“We're waiting patiently at the moment. We won't indulge in any assessments. There's still lots of time before Eura shuts down,” she said.

Hannu Kottonen, the managing director at HK Scan, emphasises that the investment in Rauma is both a replacement and growth investment. The investment is also an attempt by the meat producer to restore its eroding profitability.

HK Scan has, despite being the largest producer in the industry, fallen considerably behind its main rival Atria in terms of result. “The investment is a major one for us. Our profitability has been very modest. We first fixed the company's balance sheet,” says Kottonen.

The investment will also allow the meat producer to develop products marketed under the Kariniemen brand for both domestic and export markets. “Poultry products represent a steadily-growing trend in the consumer market. White meat is favoured in dietary recommendations. White meat also entails the least religious restrictions,” Kottonen explains.

Kottonen is also confident that there is room for meat products to grow in Finland. “Meat consumption here is low. Less meat is eaten in Finland than in all but six EU countries. We're leading the pack in dairy products, though,” he points out.

He also voices his frustration with the slew of challenges affecting the industry.

The operations of the pig slaughterhouse of HK Scan in Forssa have been disrupted by illegal work stoppages, which have also had a direct effect on meat farmers. “Farm animals will grow even if production is at a standstill,” Kottonen reminds.

“A 30-second silence for lost trust was recently held in Forssa at my initiative. Everyone approved of it.”

Animal rights activists have according to Kottonen caused disruptions at the production holdings. The sanctions imposed by and against Russia have similarly had both a direct and indirect impact on the industry.

The Chinese markets have for several years been touted as a lifeline for the meat industry of Finland. HK Scan recently established a sales office in Hong Kong. “Export permits to third countries are under a state monopoly. I wonder if the meat industry has received a single new permit in the past ten years,” sighs Kottonen.

Jari Gustafsson, a newly-appointed permanent secretary at the Ministry of Employment and the Economy, shifts the blame for the sluggish exports to the meat producers themselves. “It's up to the firms themselves. If an agreement can or is about to be reached, you'll get the permits,” he states.