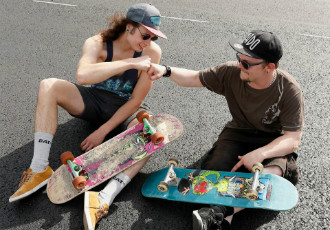 A number of local residents in Pyhäjoki, Northern Ostrobothnia, expressed on Wednesday their delight with news that the power plant project of Fennovoima is one step closer to fruition. “It evokes positive feelings. More and more customers will come,” said Mikko Salmela, the owner of an accommodation establishment.

Others, in turn, remained doubtful due to the uncertainty that has lingered over the project. “It's not without its downsides. But it'll create jobs and improve services,” said Tiina Ikola.

The project to build a nuclear power plant in Pyhäjoki received a boost after majority state-owned energy utility Fortum and construction company SRV announced their willingness to acquire a stake in Voimaosakeyhtiö SF, the majority shareholder of Fennovoima. It was also announced on Wednesday that stainless steel maker Outokumpu will bump up its stake in the nuclear energy consortium by 1.8 percentage points.

Fennovoima estimated that 65.1 per cent of its shares are consequently held by domestic entities. The Government has stipulated that a construction licence for the power plant can be granted only on the condition that a minimum of 60 per cent of shares are held by entities domiciled in the European Union or European Economic Area.

“It's a condition set by the Parliament and the Government in an attempt to guarantee that domestic business and technology expertise is committed to the massive project,” Olli Rehn (Centre), the Minister of Economic Affairs, explained in a news conference on Wednesday.

A minority share in Fennovoima is owned by Rosatom, the Russian state-owned nuclear energy company that is to deliver the power plant.

“Of course we've talked about it, but all companies made their own, independent decisions,” the Minister of Economic Affairs told.

Obtaining the necessary domestic support for the project proved difficult as a number of potential investors have withdrawn their support over the past few years.

Rehn also confirmed on Wednesday that the proposed investment by Migrit Solarna Energija, a minor energy company based in Zagreb, would not have been enough to satisfy the condition. “Its funds had been rerouted from Russia, and in that respect it was clear that Migrit didn't meet the criteria,” he said.

He affirmed that there is no risk that the European Union would add Rosatom to its list of sanctions due to the crisis in Ukraine. “Co-operation in the energy sector has been categorically excluded from the sanctions regime,” he said.

Fortum was initially intent on subscribing for 15 per cent of shares in Fennovoima, but the share purchase was conditional on its takeover of the hydro assets of TGC-1. It has yet to reach an agreement over the establishment of a joint hydro-power venture with Rosatom, despite continuing the negotiations for over six months.

The majority state-owned energy utility decided regardless to acquire a stake in Fennovoima.

Timo Karttinen, the interim chief executive at Fortum, was on Wednesday reluctant to shed light on the reasons behind the stalled negotiations with Rosatom. “It's a complex issue that concerns a number of stakeholders,” he said.

The negotiations also concern another Russian state-owned energy company, Gazprom, which alongside Fortum is a major shareholder in TGC-1.

SRV, in turn, has signed a project management agreement with the plant supplier, Rusatom Overseas, and the main contractor of the construction project, Titan-2. Its shares strengthened by roughly seven per cent on the Helsinki Stock Exchange on Wednesday, although the announcement it released included no estimate of the value of the agreement.

Juha Pekka Ojala, the chief executive at SRV, said nevertheless that the agreement is of financial significance for the construction company.

The managing director of Outokumpu, Mika Seitovirta, was similarly upbeat following the investment decision as the steel mill of Outokumpu in Tornio is the single largest consumer of energy in Finland. “Fennovoima allows us to satisfy roughly a third of our energy needs at a cost price,” he pointed out.