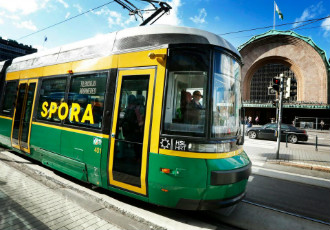 Škoda announced on Tuesday that it has acquired a controlling stake in Transtech, a Finnish manufacturer of rolling stock, for an undisclosed price.

The takeover will according to Leif Ekström, the board chairman at Transtech, promote the growth and internationalisation of the rolling stock manufacturer. Transtech is hopeful that its new owner will especially boost the exports of its new tram, with Ekström admitting that the company has struggled to convince global rolling stock buyers due to its modest size.

“We've given it a go at least ten times, but it has always boiled down to the number of references. The door is now open,” he affirms.

Olli Rehn (Centre), the Minister of Economic Affairs, expressed his delight with the acquisition on Tuesday.

“The corporate acquisition will solidify the position of Transtech as a leading rolling stock manufacturer and guarantee that crucial expertise remains in Kainuu. It is excellent news for the employees, customers and sub-contractors of the company as well as for the regional economy in Kainuu,” Rehn states in a press release.

The rolling stock manufacturer will continue to operate under its current name also after the takeover.

Ekström, who is set to step down as board chairman, has followed the growth of Transtech closely over the past six years. “It was very much dependent on domestic markets in the beginning, and continues to be today, but we've managed to develop new products and create a solid foundation for the future,” he says.

Transtech provides employment to a total of 530 people in its facilities in Oulu and Kajaani. “The takeover will have no effect whatsoever [on our personnel]. Also our order books will remain unchanged. We're confident that if new export markets open up [the number of personnel] may even gradually increase,” states Ekström.

Transtech has supplied rolling stock to, for example, VR and Helsinki City Transport (HKL) and recently received an order for 40 Artic trams from HKL. “A lot of uncertainty has surrounded the financial situation of Transtech. The corporate acquisition will create a financial foundation and ensure the cars are delivered to us,” says Ville Lehmuskoski, the managing director at HKL.

“In recent years, Škoda Transportation Group had great achievements especially on foreign markets. Our long-term goal is to consolidate the company's position mainly in Western Europe. The acquisition of the Finnish company Transtech is one of the steps to accomplish this goal,” Tomáš Krsek, the board chairman at Škoda Transportation, says in a press release.

Sinituote Oy, a manufacturer of household and cleaning products, will continue as a minor
shareholder in Transtech.