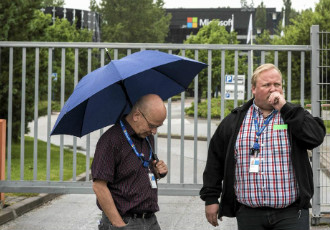 The decision by Microsoft to slash 2,300 positions in Finland could not have come at a worse time. The recession has dragged on and unemployment crept up while no signs of robust economic growth are in sight.

The job cuts announced by the software behemoth are a bitter blow for Finland, summarises Vesa Vihriälä, the managing director at the Research Institute of the Finnish Economy (Etla).

“These are skill-intensive and high-paying jobs that are important for the national economy in a number of ways. Microsoft's decision calls further attention to the need to boost the cost competitiveness of businesses and to enhance Finland's appeal as a location for businesses,” he states.

The announcement was a bitter blow especially for Salo. Microsoft announced on Wednesday that it will shut down its research and product development unit in the town, effectively putting roughly one thousand jobs at risk.

The apprehension in Salo was tangible on Wednesday. No one was expecting that the research and product development unit abandoned by Nokia would be shut down completely, although cost cuts were a concern for many.

Confidence in the future has deteriorated particularly among the local youth.

“This is a good place to live otherwise, but there are no jobs and the city is cutting back on costs,” 15-year-old Otto Uusitalo said outside the shopping centre Plaza. “Even schools are being closed. Everything is being closed,” 16-year-old Dimitri Semenov added.

Janette Nurmi, 15, and Pihla Idström, 14, estimated that Salo was branded a ghost town when Nokia pulled the plug on its manufacturing operations three years ago.

The youngsters find it hard to believe they will be able to find employment in Salo after completing their studies.

Their concerns are a bitter pill to swallow for Mayor Antti Rantakokko and other local decision-makers, who pledged on Wednesday to do their utmost to help Salo recover from the crisis. “Salo is more,” was the slogan of the town in its hayday, Rantakokko reminded in a press conference at the town hall.

The announcement also took local shop stewards by surprise. “Rumours have been circulating, but I thought the cuts would be made with a cheese slicer. We were expecting a turn for the better because there has been plenty of work for everyone and work days have gotten longer,” said Mika Paukkeri, the shop steward for professional and managerial staff.

His colleague, Aimo Leskelä, expressed his hopes that some of the affected employees will be offered a transfer to the facilities of Microsoft in Espoo. Both of the shop stewards also voiced their concerns about the impact the closure on the local economy.

“Salo has made a lot of good decisions in recent years, and we were finally back on track. The town is now in a pretty much hopeless situation,” bemoaned Paukkeri.

Nokia employees used to gather at Wanha Mestari, a restaurant in downtown Salo, whenever their jobs were under threat. For example, the restaurant was full to bursting when the closure of the mobile phone manufacturing plant was announced three years ago.

“We used to get bus-loads of employees here. I don't recall the mood ever being sad,” restaurant worker Heidi Lindh said.

On Wednesday, the restaurant was empty barring a couple and a man hanging around the slot machine. “I have no idea where Microsoft's employees have gone. Maybe they're on holiday, talking about the issue with each other or drinking at their cabins,” Lindh gauged.

The fate of the manufacturing operations has had an impact on the entire town. “We used to get lots of business visitors from abroad who would stay at the hotel next door. Their number has come down crashing,” Lindh said.

Vihriälä estimates that the mooted social contract would be vital in improving the cost competitiveness of businesses and encouraging businesses to establish operations in Finland. He also urges the Government to-reconsider its cuts in research and product development appropriations.

“It's crucial that jobs with high added value stay in Finland,” he stresses.

The manufacturing and product development of mobile phones began in Salo in the mid-1980s. It is now likely that mobile phone-related operations will become a thing of the past by the end of the year.