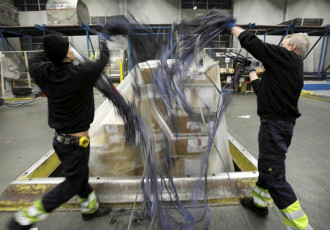 Finnair Cargo has become the first airline in the world to complete a certification programme for handling cold-chain pharmaceuticals organised by the International Air Transport Association (IATA) in collaboration with Brussels Airport, the airline announced on Tuesday.

Finnair Cargo is the largest air cargo carrier in the Nordics, transporting roughly 149,000 tonnes of mail and freight a year.

Participation in the certification programme is part of the strategic shift of Finnair Cargo towards the transport of more fragile products. “We want to lead the way in transporting pharmaceutical products. We're very proud to become the world's first airline to earn the IATA Pharma certificate,” says Antti Kuusenmäki, a director at Finnair Cargo.

Pharmaceutical products, such as vaccines, pills and medications transported in liquefied form, are among the most delicate products transported as air cargo.

“We transport medications that are very vulnerable to contamination. For example, life-saving vaccines must be stored in a temperature of two to eight degrees throughout the entire transport chain or else they'll become useless,” Kuusenmäki explains.

The new cargo terminal that is scheduled to open in the first half of 2017 will have separate temperature-controlled handling areas for pharmaceutical products and easily contaminated foodstuffs.

Finnair has revised its strategy in the course of the spring in an attempt to strengthen its position in the highly-contested air cargo sector. Kuusenmäki is confident that the decision to concentrate on special cargo will allow the airline to keep step with development in the sector.

The air cargo sector, however, is susceptible to considerable fluctuations. “We're a relatively small player globally,” admits Kuusenmäki. “We simply have to take advantage of our strengths, such as the shortest flight times to Asia.”

Finnair has also placed an order for 19 Airbus A350 XWB aircraft. “The new aircraft will enable Finnair to double its cargo capacity by the year 2020,” Kuusenmäki highlights.