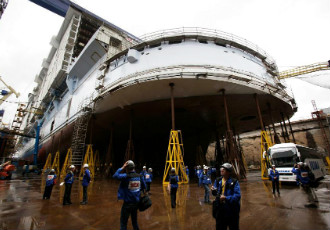 The keels of the largest cruise ships in the world by passenger capacity will be laid at Meyer Turku.

The German owner of the shipyard, Meyer Werft, announced on Monday that it has signed a multi-billion dollar contract to deliver a total of four cruise ships to Carnival Corporation between 2019 and 2020.

Meyer Werft has indicated that the contract is worth several billions of euros but refrained from disclosing its exact value. Information obtained by Helsingin Sanomat suggests that the unit price of the cruise ships is approximately 800—900 million euros.

Two of the cruise ships ordered by Carnival Corporation will be built at Meyer Turku and two at Meyer Papenburg in Germany.

News of the substantial cruise ship deal came as a relief to the 1,350 employees at Meyer Turku. “A shipwright isn't quite capable of screaming out in joy. I can say that it's a weight off my chest. This promises to create jobs until 2020,” enthused Jari Aalto, the chief shop steward at the shipyard.

“Working groups have branded the shipbuilding industry as an industry in its twilight. These orders show that certain decision-makers can't tell the difference between a sunset and sunrise. It's particularly great that the shipyard received the orders from a new customer, Carnival,” he highlighted.

Jan Meyer, the managing director of Meyer Werft, revealed in an interview with Helsingin Sanomat that he is more thrilled about the fuel solution than the record-breaking passenger capacity of the cruise ships. “It's especially great that the new cruise ships will be powered by liquefied natural gas (LNG). This is a breakthrough for LNG in cruise ships, and I'm confident more is to come,” he said.

The use of LNG to power the cruise ships will eliminate soot particle and sulphur dioxide emissions. “In addition, it'll promote the spreading of LNG refuelling stations to ports used by the cruise ships,” added Meyer.

The Turku-based shipyard has previously floated one LNG-powered passenger ferry, M/S Viking Grace, and has received an order for another from Tallink Silja. Both of the passenger ferries, however, are markedly smaller than the cruise ships ordered by Carnival Corporation.

Meyer pointed out that the order books of the shipyard are healthy. “Annual growth has been nearly 20 per cent in the past three to four years,” he highlights. “The sun is shining on the cruise market. We're also about enter into new markets. China is about to tag along.”

In addition, he expressed his gratitude to Finnvera, the export credit agency of Finland, for helping secure the funding required for the shipbuilding effort. “Finnvera is an excellent instrument to promote export deals and to create new revenue streams for Finland,” he said.

Information obtained by Helsingin Sanomat indicates that the exposure of the state-owned export credit agency will creep up to over one billion euros.

Meyer also gauged that the history of co-operation between Meyer Papenburg and Carnival Corporation was key to clinching the contract.

Petri Peltonen, a director general at the Ministry of Employment and the Economy, believes the contract is vital for the continuity of shipbuilding activities in Turku. “It's a big thing for the credibility of the shipyard to have the world's largest cruise ship operator as a customer,” he points out.

Meyer Werft is rumoured to also be in talks with Royal Caribbean over another substantial cruise ship order. Meyer has refused to comment on the rumours.