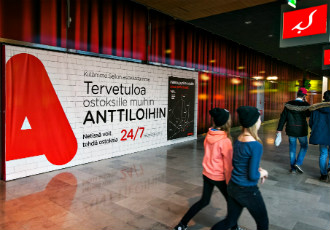 Anttila must be pulled into the 21st century and regain its relevance in the lives of modern-day Finns, envisions Markus Roschel, who as the new managing director of Anttila will seek to restore the profitability of the heavily loss-making department store chain.

Kesko on Monday sold its Anttila and Kodin1 department stores to 4K Invest for one million euros.

“Anttila hasn't been able to keep up with department store trends,” Roschel summarises the struggles of the traditional retail chain. “We have to improve the customer experience.”

The Germany-based investment fund is set to, for example, overhaul the information technology systems of Anttila, improve the usability of NetAnttila and develop the omni-channel experience – that is, the integration of digital and brick-and-mortar services.

Anttila had become a heavy burden for Kesko. On Monday, the traditional retailer raised its outlook for the year after announcing the divestment and currently expects its operating profits to increase from the previous year. In addition, news of the divestment lifted the price of Kesko B shares by over 5 per cent to 36.61 euros on the Helsinki Stock Exchange.

Mikko Helander, the chief executive at Kesko, conceded on Monday that the sale price was rather modest. “Kesko would've had a long road ahead of it before it could've expected a positive operating result from Anttila,” he explained. “We also believe it's important to focus on our strong areas.”

Anttila has accounted for a modest four per cent of the net sales of Kesko.

Kesko also announced that it will record a non-recurring charge of 130 million euros related to the financing, operating capital and assets of Anttila for the first quarter of 2015.

Roschel, in turn, estimated that 4K Invest is better-equipped than Kesko to restore the profitability of Anttila due to its expertise and experience in acquiring struggling companies and the offshoots of major corporations and restructuring them.

“We're experts in restructuring,” he declared. “We'll focus on Anttila one hundred per cent.”

4K Invest has, for example, successfully turned around the fortunes of Adler, Roschel pointed out. The German fashion retailer was operating at a loss of 50 million euros a year when it was acquired by 4K Invest from the retail group Metro. Five years later, the minus sign on the balance sheet had been replaced and Adler was reporting annual profits of 50 million euros.

Registered in Luxembourg and headquartered in Germany, the investment fund has also overseen the restructuring of the grocery shop chain Zielpunkt and the supermarket chain Woolworth in Austria.

Roschel assured that 4K Invest does not intend to continue the streamlining effort. On the contrary, he hopes that new department stores can be opened in the future. “It's our desire to stay close to Finnish customers,” he says, stressing the significance of maintaining an extensive department store network.

News of the divestment was on Monday received with “cautious optimism” by Anttila employees, described Kai Vauhkala, the chief shop steward of Anttila in Lahti. He believes Kesko failed to develop the department stores sufficiently and hopes that 4K Invest will implement the necessary reforms.

“Anttila has fallen slightly behind in terms of its general appearance. Some kind of reforms are needed.”