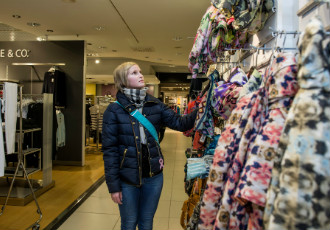 News that Stockmann is set to shut down its department store in Oulu was greeted with dismay by shoppers at the department store on Friday. “I'm very annoyed because this is such a good store,” said Jonna Tauriainen, 19, while browsing for clothes in the women's section.

After slipping into the red last year, Stockmann on Friday revealed that it is planning on shutting down three loss-making department stores in Russia, in addition to the one in Oulu.

The announcement was also a bitter blow to the 230 employees of the department store. “Competition will decline and the city will become more backwardly if Stockmann goes,” a shop assistant who refused to disclose their name sighed.

The traditional retailer will launch consultative negotiations with its staff. Its current lease on the property will run out in 2017.

The objective of the efficiency programme is to reduce annual costs by 50 million euros. In addition, the retailer is considering shutting down certain sections of its department stores and looking into leasing out space to third-party retailers.

In Oulu, the purchasing power of local residents has fallen in the wake of mass lay-offs in the information and communications technology sector, which according to Matti Pennanen, the Mayor of Oulu, has already had an impact on the local service structure.

“The economic area of Oulu has lost an estimated 120 million euros in corporate taxes due to the cutbacks of Nokia,” he highlights.

The effects are already visible on the streets of Oulu. “Small shops in downtown Oulu have closed their doors. There's roughly 5,000 square metres of vacant commercial and office space in the city centre and some 20,000 in the entire city,” tells Pekka Laine-Harju, the director of sales at Catella Property.

It is some consolation that a Sokos department store and shopping centre of nearly 20,000 square metres is being built no more than a couple of blocks away from the doomed department store. The construction has already progressed to rooftop height.