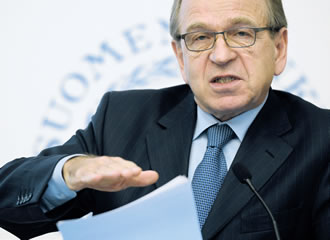 THE BANK of Finland downgraded its outlook for gross domestic product growth in Finland on 11 December, forecasting that national output will contract by 0.1 per cent in 2015 and grow by 1.0 per cent in 2016.

One reason for the revised forecast are changes introduced to national accounting practices.

Erkki Liikanen, the Governor of the Bank of Finland, emphasised that policy-makers must take determined action in the face of alarmingly sluggish economic growth. The key obstacles to economic growth according to him are the weak productivity of work, lack of investments and shrinking labour force.

"Finnish exports have decreased by roughly 20 per cent since the onset of the global financial crisis," Liikanen pointed out.

Policy-makers, he cautioned, must brace themselves for difficult but necessary reforms because sustained measures are required over the next ten years to generate sustainable economic growth. He also argued that it is necessary to reduce public spending because stimulus measures have proven ineffective in addressing the structural problems of the economy.

The Bank of Finland acknowledges in its forecast that the four years of contraction and the subsequent period of sluggish growth are exceptional both historically and internationally.

Finnish industries should also not expect great help from abroad due to the relatively bleak outlook for global economic growth. In particular, economic recovery has been slower-than-expected in the euro area, which has had a notable impact on the entire continent.

The reasons for the prolonged recession are nonetheless largely domestic, stressed Juha Kilponen, the head of forecasting at the Bank of Finland.

On the other hand, the weakening euro and decline in oil prices may according to the central bank encourage faster-than-expected growth. Regardless, structural reforms are necessary to bolster the competitiveness of Finnish industries, which, in turn, will require reforms in the labour market especially to increase the availability of work.

The lacklustre economic growth will also ensure that the deficit in public finances will remain considerable and that public debt will continue to accumulate. At present, the debt is forecast to creep up to 64 per cent of gross domestic product in 2016, after hovering around 59 per cent in 2014 and rising to 62 per cent in 2015.