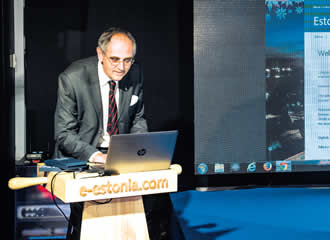 The many advantages of establishing and maintaining a company already has drawn many Finnish businesses to Estonia, however the brand-new system of e-residency is set to accelerate this process.

FROM 1 DECEMBER, foreigners can apply for Estonian e-residency, which is a state-issued digital identity for non-residents that is unique in the world. It allows the individual to use Estonian e-services anywhere in the world similarly to Estonian residents: they can give digital signatures to documents, establish a company, make quick bank transfers, submit tax returns in Estonia online or participate in the management of a company registered in Estonia.

For these actions, e-residents receive an ID-card without a photo, but with a microchip containing security certificates for authentication and digital signatures. This however, doesn't mean that the e-residents would have any residential or citizen rights, or rights of entry to Estonia or the EU. Furthermore, the document can't be used as a physical ID-card or a travelling document.

From 6 October until 1 December it was possible to register onto the e-residency information list, which means showing an interest, but not yet becoming an e-resident. During this time, around 13,500 people took up the possibility, amongst them about 1,000 Finns, says Siret Schutting, the director of initiative E-Estonia Showroom at Enterprise Estonia.

Schutting explains that the main reason that people apply for e-residency is business, either establishing a new company or bringing their already existing firm to Estonia. This is also confirmed by Kerli Veski, Head of Consular Section at the Estonian Embassy in Helsinki, who says that the inquiries made to the embassy have been mainly related to business interests.

Schutting says that the e-residency is useful for businessmen, as they can use this for completing their entrepreneurial actions, such as tax declarations, online themselves without any middlemen. While establishing a company was previously possible for non-residents as well, it is just easier and faster with e-residency.

"They can do all of this no matter where they are – in Estonia, Finland, Shanghai," adds Schutting. "This saves time and costs; it just makes life easier."

Requiring a visit to Estonia

The other significant group interested in e-residency is made up of people who have some connection with Estonia, but aren't residents, such as entrepreneurs that visit the country every few months. Schutting also tells that many Finns, who are just curious to know how Estonian e-services work, have shown interest.

Now, the official application period has commenced, but according to Schutting it is yet too early to publish the numbers of registered people. Christian Rajalin, owner of Tallinn-based company CAWI Finance says that also both he and people from his business circle are interested in the opportunity. They would also like to recommend it to their clients, other businessmen that they consult about entrepreneurship in Estonia, but want to have more experience and see the proof of real-life benefits in terms of saved money and time.

"I hope that Estonia will be a frontrunner with e-residence and provide high quality services," he adds.

The people interested in becoming e-residents need to visit a Police and Border Guard office in Estonia for submitting an application and providing data, including face image and fingerprints. After the officials have completed the background check and determined within a maximum of two weeks that the interest in e-residency is substantiated, the applicant is required to pick up the card with the levy of 50 euros in person.

Therefore, this process currently requires a visit of Estonia, but the developers are working on giving the people a chance to apply and receive e-residency through Estonian embassies by the spring of 2015.

Finnish entrepreneurs have predicted that e-residency can be very useful for Finns who have or want to establish their businesses in Estonia.

"E-residency will speed up interaction with other business partners and officials and at the same time cut costs," says Rajalin.

Pekka Saikkonen, an entrepreneur and the member of the board of the Finnish Small Business Entrepreneurs Association, stated in Aamulehti on 15 October that with e-residency the number of Finnish companies in Estonia could even double next year. As of 2012, there were around 27,000 companies with a Finnish background, of which some 4,000 belonged only to Finns in the Estonian business register.

Schutting agrees that the increase of Finnish companies is expected, but is cautious with predicting the number. She sees e-residency, which carries the goal of expanding Estonian economic space, rather as a key or an impulse for opening a company, whereas the reasons are hidden elsewhere. "Estonia has a good entrepreneurial environment and tax system," she adds.

Rajalin explains that Finnish businessmen are attracted to Estonia, as taxation is transparent and simple. The general value added tax (VAT) is 20 per cent and income tax for companies and employees that is paid when the profit is distributed is currently 21 per cent, and is set to drop to 20 per cent next year. Whereas in Finland, the corporate income tax of 20 per cent is paid from the profit and the standard VAT is 24 per cent. Rajalin adds that many taxes, like municipal, church, dividend, land or car tax that are collected in Finland, don't exist in Estonia.

Due to this moderate tax level in Estonia, the general price level is about half the Finnish level, so people have a relatively higher purchasing power, and therefore, the salaries that the employer needs to pay are up to three times smaller.

"You get three times the work done in Estonia compared to Finland with the same amount of money," says Rajalin.

Advantages of establishing a business also include easy, and if needed, English-language interaction with officials, as well as a positive attitude towards entrepreneurship.

"People who succeed, regardless of whether they are entrepreneurs or employees, are regarded as national heroes," adds Rajalin.

The security of e-residency, like the risks of handing the digital ID over to others or tax fraud, have been discussed in the Estonian media. Siim Sikkut, ICT Policy Adviser at the Government Office of Estonia assures that the risks of improper use have been already taken into account in the development process and will be improved further: applicants need to pass a background check and the state has the right to invalidate the e-residency when it becomes necessary. He argues that e-residency will rather increase the security of the services. Schutting added that they see the system as reliable, as Estonia has used it for 15 years. A digital signature, for example, is even more trustable than the physical one, as it's possible to see to whom, when and where it was given.

"For us, e-Estonia is like a forest where everyone leaves their footprint," compares Schutting.

Currently, Estonia is looking forward to significant interest in applying for the e-residency, but it is expected to increase in the spring when people can undertake the process via the embassies. The guesses of how many e-residents Estonia, a country of 1.3 million people, could have in the future have been prosperous. The ICT Deputy Secretary-General at the Ministry of Economic Affairs and Communications of Estonia Taavi Kotka has announced that the ultimate goal is to have 10 million e-residents by 2025. The government has said that within the next three years, Estonia hopes to gain at least 17,000 e-residents and 5,000 companies, as Estonian daily Postimees reported.

Schutting concludes that besides attracting new e-residents and businesses to Estonia, the system is aimed at being a trailblazer for Estonia's goal of being a society that is looking to the future and showing that governmental e-services can be secure and transparent.

"It assures other countries to do this; we see a positive impact for the whole society."