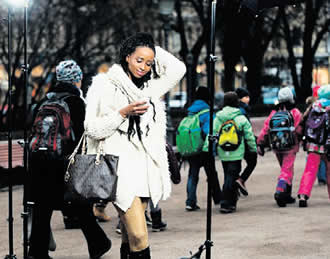 A department store advertisement shows happy, colourful children jumping around in winter clothes. Among them is a girl with dark curly locks, with an African background.

Finland's multiculturalism is beginning to show in marketing and advertising.

Yet regardless of that, says Kupiainen-Groundstroem, the interest in using ethnic models is increasing slowly. There is already a high demand for young adult and child models, but there are only a few ethnic female adult models in Finland.

One of them is 25-year-old Mona Musse, educated as a translator. She arrived in Finland when she was at kindergarten age. In the autumn Musse created her own multicultural model agency, Choco Promotion. Chocolate refers to her own East African skin tone.

In the modelling world physical characteristics are described bluntly. Black is black; milk coffee is milk coffee. Finns, on the other hand, are elovena.

Even at Musse's agency, there is more elovena on offer than there are other models.

Musse established the modelling agency because she wants to offer dark skinned models the possibility to find work in Finland. "It's also rewarding to be a pioneer."

Although there has been plenty of work, Musse wishes that large Finnish companies would offer more work for Finnish models, instead of commissioning photo shoots abroad, or hiring Estonian models. Can it be the case, that it is easier for the industry to accept a child model as a Finn than an adult model, if the model doesn't look like a typical Finn?

"That might be a reason," says media researcher Annamari Vänskä. Although it's possible to see change, she says the advertising world is still 'white'.

"You can find black models in more artistic editorials. Yet in commercial advertising, dark skinned models are lighter and have more Western features than in fashion stories," Vänskä explains.

Laila Snellman, director of a Finnish modelling agency, says that in the 1980s, "Finland had everything, including black models in advertising."

After the 1990s recession, the modelling market has had a "long lasting white season."

Snellmann says she misses seeing the "patchwork of colours" in Finland.

But will multiculturalism also change the Finnish beauty ideal? Kupiainen-Grounstroem believes that a slow change is taking place.