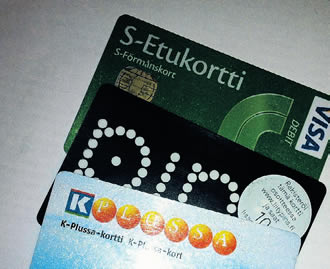 Retailers fail to take full advantage of the data generated by their customer loyalty programmes, states Mika Rytkönen, a senior partner at Talent Vectia with twenty years of experience in developing loyalty concepts.

"It's obvious that retailers have been extremely unimaginative about offering benefits to customers – that is, other than reduced prices, points and loyalty benefits," he says.

Loyalty programmes are so prevalent in Finland that they generate a wealth of information on consumer behaviour.

A new milestone was reached in late September when Pins, a loyalty programme launched by Suomen Lähikauppa in May, received its one-millionth member. Its established rivals, the S-Etukortti and K-Plussa cards, are respectively used by 3.6 million and 3.8 million people in the country.

A Helsinki-based student, Aino Kalmbach, states that she has yet to benefit greatly from her S-Etukortti, nor is she considering joining another loyalty programme. "Sure, the card comes with some decent discounts," she acknowledges.

Regardless, it has yet to influence her consumption habits dramatically. "The prices of stores are more significant than whatever loyalty card I happen to have."

Retail chains are doing whatever they can to make their loyalty cards worthwhile.

The holders of the K-Plussa and S-Etukortti cards can earn loyalty points and receive special benefits from a wide variety of stores. The points are accrued monthly on the basis of purchases and redeemable for cash rewards.

The loyalty points earned in the Pins programme, in contrast, can be used immediately or spent on large purchases, such as flight tickets, but not redeemed for cash rewards. At present, the loyalty programme incorporates over 400 online shops as well as several shops abroad.

Rytkönen is hopeful that retailers expand the variety of benefits they offer to loyal customers. Loyalty points, he suggests, could be redeemed for home deliveries or other helpful benefits. "Today, you must have a novel understanding of the customer's world and be present wherever the customer is," he stresses.

Retail chains, he summarises, have plenty of room for improvement.

"Services are nowhere near as personal and detailed as they could be," he states.

Rytkönen is enthusiastic about the introduction of Pins, pointing out that a lack of competition can result in stagnation. "I'd say that it'll at least get the major players on their toes. The fact that there are options is very positive."

The competition is set to become even fiercer in the years to come, with the German retailer Lidl set to launch its loyalty programme in Finland. "Lidl has done exceptionally well to change the market situation. First, you enter with low prices, then [you offer] a better customer experience and at some point surely also a loyalty programme."