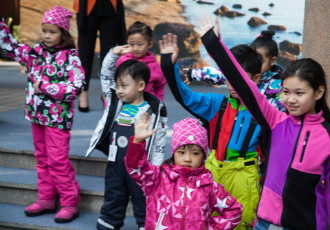 Finland is a pure and unpretentious country with an abundance of know-how and creativity.

Such was the picture portrayed of Finland as the representatives of Iittala, Reima, Suunto and Marja Kurki told about their companies and showed their marketing videos to members of the Chinese media and design industry at the official residence of the Finnish Ambassador in Beijing on Thursday.

The marketing event marked the official launch of Pure Finland, a project to increase the visibility of Finland and Finnish brands in China.

Finnish companies are gradually awakening to the opportunities presented by China, one of the hottest consumer markets in the world. In China, the number of people with both the desire and the disposable income to buy brand items is increasing sharply.

Although Finns have exported lifts and production facilities to the country for several years, Finnish-made products remain a rare sight on the shelves of Chinese department stores.

“We have very few companies with experience of Chinese consumer markets,” admits Jari Gustafsson, the Finnish Ambassador in China. “But it's now obvious that the first wave of Finnish companies is on its way.”

The wave includes Suunto, a developer of sports watches, and Iittala, a design company specialising in glassware, which both opened their first stores in the country last autumn. The manufacturer of children's clothing, Reima, did so a year earlier.

While not quite luxury goods, their products fall into a category that is expensive, esteemed and exclusive. The market for such products is are gradually shifting to Asia, and especially to China. “The opposite will take place in western countries. There, customers will drop into the next category,” predicts Elina Björklund, the CEO at Reima.

However, not every company will have what it takes to conquer China, particularly due to the fact that the majority of Finnish consumer brands are owned by small and medium enterprises. “Chinese consumer markets may be the most competitive in the world,” says Caroline Xue, the managing director at Marja Kurki Beijing. “Everyone else is also here.”

Xue knows how to establish a Finnish brand in China, for she was an integral part in the successful foray of Marja Kurki into the country some 20 years ago. This summer, the company opened its 67th store in China.

A company eager to foray into China must do so with fireworks, Xue says. “People here don't appreciate small. They have confidence in big [brands].”

In addition, it is crucial to find a specific pigeon-hole, she adds. “You must know exactly why people need your products specifically.”