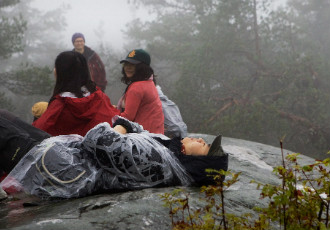 A group of Chinese visitors sit in silence as the wind whistles through the treetops and the rain drizzles down over the Akka-Koli Hill in Lieksa. These seven visitors are on a one-week trip in North Karelia to take in the silence and sounds of the nature.

They have begun their second day with a walk in the Koli Natural Park with guide Irja Tanskanen.

Su Fan has already experienced something unbelievable at their lodgings, something that would not have been possible in her home city of Hong Kong. “The sound of raindrops. I had never heard the sound they make,” she tells.

In North Karelia, silence is expected to boost the local tourism industry. Alongside local businesses, the University of Eastern Finland is currently mulling over how to take advantage of silence in the services offered to foreign visitors.

Sponsored by the European Social Fund, the project concentrates especially on China. The first group of Chinese visitors arrived in the region in the winter of 2013.

Noora Vikman, a soundscape researcher at the University of Finland, reminds that in silence travel the concept of silence does not necessarily refer to the total absence of sounds. “It can also refer to soundscapes where individual sounds are clearly discernible. That's possible in a natural environment, but in major cities sounds blend into a continuous bustle,” she says.

In addition, the concept is not limited to listening but also entails unhurried activities in a relaxing environment.

Kristiina Hietasaari, a research and development director at the Finnish Tourist Board, believes silence to be a genuine opportunity for Finland, despite the fact that it has yet to be successfully productised.

The demand is certainly there, with wellness tourism growing rapidly across the world. “The population grows older and urbanisation intensifies. People definitely yearn for their own peace more than ever,” Hietasaari gauges.

On the other hand, she also points out that silence travel appeals particularly to visitors who have already experienced the most popular tourist hot-spots in Europe, for example.

A lot remains to be done, if Finns are to sell silence. “Other countries are surely also working on it. The Nordic Countries can offer the peace of the nature. There are already fancy wellness centres in the Central European countryside,” explains Hietasaari.