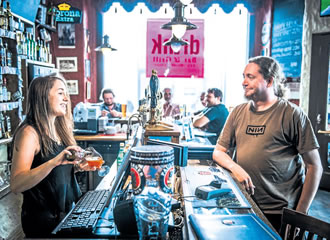 A microbrewery boom is sweeping over Estonia. Over the past 12 months, half a dozen microbreweries have popped up, craft brews have appeared on the menus of restaurants and a new beer house has been established in Tallinn's Old Town.

"At the turn of the year, restaurants started to suddenly offer the brews of Estonian microbreweries," says Miikka Kulmala, a game programmer based in Tallinn. Mass-produced beers taste like bad water, he characterises, while sipping a pint of Aotearoa Sauvin, an amber ale brewed by the local microbrewery Hopster, in a pub in the Old Town.

The share of microbreweries of the Estonian beer market remains below one per cent, but the demand is surging. "We have no time for marketing, only for fulfilling orders. Rimi [a major Baltic retailer] is interested in our beers, [and] Finnish retailers have made enquiries. My head is spinning," describes Enn Parel, a co-founder of Põhjala Brewery.

The next competitor to venture into the budding craft beer market in Estonia will be Finland's Sori Brewing. "When we started to plan setting up a microbrewery two years ago, there was not a single similar [brewery] in Estonia. All of the sudden, we're in the middle of a boom," says Heikki Uotila of Sori Brewing.

Co-founded by Uotila, Pyry Hurula and Samu Heino, the microbrewery raised a total of 450,000 euros in seed capital from 225 investors with a three-month crowd-funding campaign before Uotila and Hurula on 1 August moved to Tallinn to set up the brewery. "We wanted to chide the Finnish alcohol policy. We got a flat in Tallinn today," the men rejoiced.

"We can't set up an online shop in Finland due to the monopoly. We want to internationalise and pour over borders," they explained.

Uotila and Hurula are standing inside an empty industrial hall covering over 700 square metres, which used to house a weapons factory. Here, Sori Brewing plans to welcome weekly visitors in a similar fashion to their American competitors.

The facility is located no more than a ten-minute bus ride away from downtown Tallinn, near the busy shopping centre Ülemiste Keskus.

As soon as the brewery is up and running and the permit documents are in order, sales abroad can begin. "Finnish microbreweries can send bottles for us to sell through the online shop to Finland," says Uotila.

Tuomas Pere, the head brewer at Pyynikki Craft Brewery, was driven by similar frustration when he participated in founding Papabeers, an online shop for craft beers, in Estonia earlier this year. "This is a political statement," he confirms.

Vahvaportteri, a porter created by the Tampere-based brewery, was awarded the gold medal at the 2014 Global Craft Beer Awards in Berlin in late July.

"The only way to get the beer to our [900] shareholders was to set up an online shop in Estonia. Even if the shareholder lived next to the brewery, we would first have to send the bottle to Estonia and then back [to Finland] by mail. Finnish laws are so silly," Pere slams.

"Most of online shops don't pay excise duties. While Estonia is close, it's impossible to keep track of online shops based in Germany or the United Kingdom from Finland," he highlights.

Papabeers will pay excise duties and alcohol tax on beers ordered to Finland.